No thanks
PROJECT: BUILD THE E-100
SubscribeUnsubscribe
✖
Gallery (1) 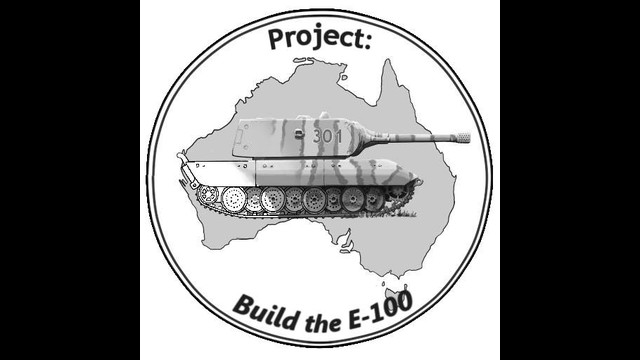 My name is Alexander, my team and I are aimed at constructing an operational E-100 German "super-heavy" tank. The vehicle will be constructed here in Australia, and once complete will be on display at various locations. Detailed below is everything you need to know about us and our goal. More detailed information can be found on our Facebook page or website.

A brief history lesson: The E-100 is the last in the Entwicklung (E) series of prototype vehicles. This series of vehicles was aimed at standardizing the german armour, and inevitably replacing exisiting vehicles. The E-100 was to be a direct competitor to Porsche's "Maus" tank. Although the Maus weighs in at an almighty 188 tons, Krupp was adamant on a lighter design, and thus drafted the design for the E-100 with that in mind. After much design tweaking the final result was to weigh in at 123.5 tons when combat loaded. Design continued until 1944 when the Germans decreed the development of super-heavies to stop, although work on the E-100 continued with only three Adler employees designated to work on it. The first prototype was never completed and was found by the 751st Field Artillery Battalion of the American forces on the factory floor on April 22, 1945 in Bad Lippspringe, Germany. The partially completed vehicle was removed by the British Army for evaluation and then scrapped.*

Our aim is to create this vehicle as historically accurate as possible, however we will be making weight saving tweaks, but don't worry, the vehicle will look exactly the same, only perform a little better. The vehicle will be fully operational excluding the main and coaxial cannons. Detailed build updates can be found on our Facebook page and website, links to these will be available at the bottom. If you have any questions before donating, we welcome you to post them at the Facebook page before you donate. If you want to be apart of this project feel free to message us there too. Any and all help is appreciated greatly.

The project will run at various stages, with several substages to each category. The purpose of this is for donators to know exactly what they're donating on! So check back here as frequently as possible to catch updates and changes. Every progress update will also be posted on the Facebook page.

STAGE 1: Pre-Build
SUBSTAGE A:
This initial stage of funding is aimed at the hardcore fans and tank enthusiasts. However it can also be considered one of the most important. It covers things such as equipment, location and location prepping. Costs for staff and staff trainers. Housing for the team at the build site. Corporate related fees and insurance issues.

As always we urge you to be sure before donating, check the details of the project and ask us a question if necessary. Keep in mind donations are non-refundable.

Crowd-funding is a very important source of income for every restoration project and this is no different. Each donation helps us bring this vehicle to life. Without the support of each and every one of you, this project would take much, much longer to complete.
Please keep in mind that rewards are prone to change. We would like to add many more in the future to assist our donors in any way possible, however existing rewards may be tweaked in the process!

Thanks you to everyone who donates! We're very excited to be launching this ambitious project and we hope to have the vehicle moving around for the first time soon.

You will have your name recorded on the official wall of donators which will be present with the tank at public viewing sites.

Your name will be displayed at the end of our official documentary.

This pass entitles you to early access of the vehicle. A professional photo shoot with the vehicle before public completion. Pass holders are also entitled to an early interior tour of the vehicle. Only VIP pass members will have access to the inside of the tank once initially complete. Pass does not expire.

The Level 2 Pass entitles you to 1 ride in the completed E-100. Once the vehicle is complete, specified "Ride Days" will occur on which these passes can be claimed. Valid until 3 years after completion.

Your name will be stamped into a plaque as a major contributor to the project.

Alexander Mirabito is managing the funds for this campaign. The campaign is for a personal cause.