Thank you everybody. Our campaign is now over. ✕
Ride to Give - Help the Haire Family
SubscribeUnsubscribe
✖
Gallery (1) 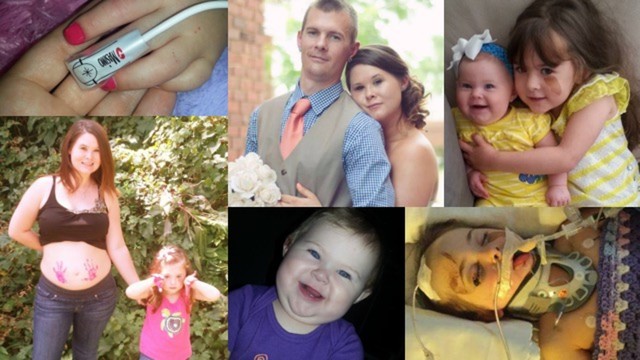 Cristen and Dustin Haire are living a nightmare.

On Monday, October 13th at 5:30 pm, Cristen and her two young daughters were in a horrific vehicle accident that claimed the life of their infant daughter and critically injured their 4 year old. Little Aubrey, just 8 months old and 4 year old Brooke were gravely injured and sent to the Levine Children’s Hospital in Charlotte, NC. Sadly Aubrey died in Cristen's arms.

Brooke’s brain stem was severed from her spine and doctors think she will be paralyzed from the neck down. On October 19th, doctors performed a complex surgery to fuse her spinal cord and brain stem back together using a graft from her hip. They also cleared mucus from her left lung to make breathing easier. The procedure was successful and doctors were able to uses wire instead of screws which is better for her a child her size. Brooke also suffered a brain injury that has compromised her breathing, swallowing, and possible her cognitive abilities. Doctors are not sure if she will regain her speech or what brain processing will return. She is scheduled for a second surgery today, October 21st, to place a g-tube for feeding and a have tracheotomy so she will be able to have breathing help from a ventilator.

Cristen, 24 and Dustin, 33 are now planning Aubrey’s funeral from Brooke’s bedside. They have yet to leave the hospital since the accident and are still in a state shock. We can’t even begin to imagine the pain and anguish they are suffering. Friends and family from Georgia, Florida, and North Carolina have raised over $8,000 for the family but that will only scratch the surface of what they will need. Cristen only works part time and she and Dustin have not been able to return to work. Before the accident the Haire’s were living paycheck to paycheck and just getting by week to week. Now besides all they are dealing with at the hospital, they are worrying about how they are going to cover out of pocket medical expenses.

Todd Harmon, of Bethlehem Angels Tyler & Olivia Harmon sent us the Haire family as special cause request. The Haires are friends of one of Todd’s clients, and if your remember, Todd was the first to step up to help Tripp Halsted Updates after Tripp’s accident. The RTGA in turn helped Todd and his family when they had a terrible car accident last year. Brooke’s injury is the same one Todd’s son Tyler suffered in their car accident…we know from his progress that there is hope. It is extremely important to the Harmon family to pay it forward after receiving such support from the RTGA after their ordeal.

This is a tragedy no family should have to go through. The uncertainty that lies ahead is simply terrifying, and they are living moment to moment to save Brooke, say goodbye to sweet Aubry, and begin to rebuild their lives and live their “new normal”. We are not setting a goal because this family’s needs will be endless. Instead we will run the fundraiser until Monday 10/27 to see just how much Ride to Give Army love we can show them in prayers and donations. Please help us help the Haire family.