Thank you everybody. Our campaign is now over. ✕
Ride to Give - Haleigh Needs Our Help
SubscribeUnsubscribe
✖
Gallery (1) 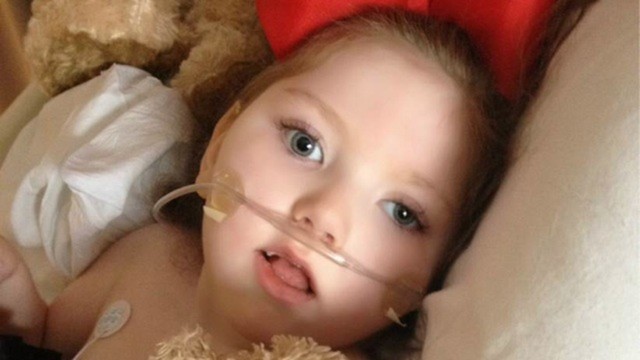 She has the seizure disorder Lennox-Gastaux Syndrome and the current medicines she is talking are not helping her. It is the opposite, they are slowly killing her.

Haleigh Reese Cox was born on July 19th 2009 and is the beautiful daughter of Janea and Brian Cox.  As a Type 1 Diabetic, Janea was always told she would never have children, so to have Haleigh has been a miracle. Between 6 and 7 months the Cox noticed that Haleigh was not meeting her milestones and they became very concerned.  After many tests, Haleigh received the diagnosis of Cerebral Palsy caused by a possible stroke in the womb. Soon after, around 8 months, she began to have seizures. The Cox had banked Haleigh's cord blood so at 13 months re-infused her with her own stem cells. They also have traveled to New Orleans to for hyperbaric oxygen therapy to help heal her brain. At around 18 months, Haleigh started having more intense seizures called Infantile Spasms.  Over the next few years the seizures progressively worsened.

At age 3, Haleigh was diagnosed with Lennox Gastaux Syndrome, a difficult-to-treat form of childhood-onset epilepsy that most often appears between the second and sixth year of life. This syndrome is characterized by frequent seizures and different seizure types; it is often accompanied by developmental delay and psychological and behavioral problems.  She has failed 10 anti-epileptic drugs, had a Vagul nerve stimulation implanted at the age of 4 and is currently on the ketogenic diet. Also, she was diagnosed with Type 1 Diabetes.

Currently Haleigh has been in the PICU in Atlanta for 25 days and her parents are slowly watching their daughter slip away.

However, there is something the Cox feel that could save their daughter's life but it is controversial and not legal in the state of Georgia... Cannabis Oil. Doctors know that high Cannabidiol (CBD) medical marijuana can help Haleigh live a normal life. There is strong anecdotal evidence from other children with similar sever seizure disorders who have been treated with this oil that their seizure activity went from 100 or more a DAY to 1 or 2 a MONTH. The oil that is used is organic and does not induce the psychoactive "high" typically associated with recreational marijuana into the child's system.  It is much safer then many of the other drugs on the market, the same drugs that are right now robbing the Janea and Brian of their little girl. However Georgia law prohibits marijuana of all kinds... for now.

On January 29th, the Georgia House of Representatives introduced "HB 885 Haleigh’s Hope Act." The bill amends the old medical research law passed in 1980 – formerly Controlled Substance Therapeutic Research Act – buy expanding the medical conditions for which cannabis can be used. The "Haleigh’s Hope Act" has included epilepsy to the list of ailments that doctors could legally use marijuana and its derivatives to treat. The realty is even if this bill passed today, it would be months before the actual medicine would be available to those in need. Haleigh does not have months. Ride to Give has been following Haleigh's story closely and feels now is time to step in and help save her life.

What her parents need most is to get Haleigh stable enough to travel. Once this happens, hopefully soon, Janea and Haleigh would go to Colorado where there are doctors trained to treat her form of epilepsy and ready to treat her with the Cannabis Oil. Sadly Brian needs to remain in Georgia for work, leaving Janea alone carry this burden. Once the bill passes and the medicine is available in Georgia, Haleigh and her mom would move back.

We are holding this "Flash Fundraiser" to raise the funds need to get the Cox to Colorado and also make it possible for Brian to travel a few times a month to see his family.

There is no time to wait... We need to help this family NOW!