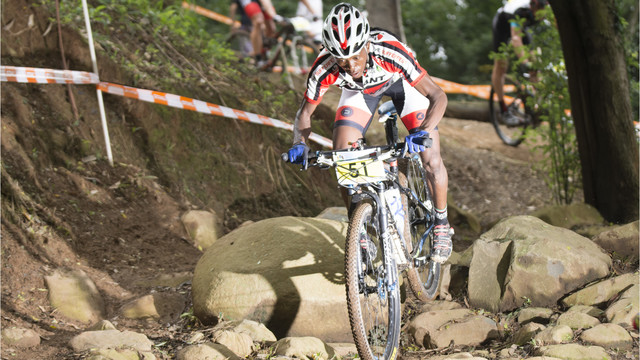 Welcome to Our Fund Razr Campaign

Phetetso has worked hard to get to where he is today and is an inspiration to the whole country.

He loves his current bike and it has carried him to many great results.  With a few minor repairs it will be more than capable of getting him round the Rio Mountain Bike Course.  But we want him to have something better than that – we would love him to get the bike of his dreams!

We have a partnership with Giant Bicycles, but that only covers the frame and there are a lot more expensive parts needed to build a complete bike.

We have already received a generous boost from Wattbike/ The Sufferfest of $1000AUD.

Phetetso’s story is typical of many African cyclists.  He grew up in a good family, but they never had enough money to buy him a bike.  He used to “hire” a bike just to get that feeling of freedom.  He got his first bike – a single speed cruiser bike with white-walled tyres – when he was in his early twenties, and it was immediately clear that this young man had a lot of talent.  He could keep pace with the national elite road riders for quite some kilometres on this bike.

Over the years, Phetetso has won many Lesotho National Championships – including the mountain bike title for the past 5 years.  All this was accomplished whilst balancing a job packing shelves at a supermarket 7 days a week to support his young family.

A few months ago he became Lesotho’s first “professional” cyclist.  He gave up his $80-a-month job to become a $100-a-month Pro.  He has earned his place in the Olympic Games by consistent racing on the South African mountain bike circuit, which has seen him earn some great results and a world-ranking just outside the top 100.

Lesotho is a small, but proud, developing nation completely surrounded by South Africa.  It is ranked as one of the poorest countries of the world, yet boasts a mountain bike cycling team that is ranked 35th in the world and 2nd in Africa.  There are no Lotto funds or big brand endorsements for sportsmen in Lesotho.  The Lesotho government and Lesotho National Olympic Committee are not able to offer any funds towards a new bike.

Riding at the Olympic Games means so much to Phetetso.  He is so humbled, yet excited at the opportunity.  As the first cyclist ever from Lesotho to ride at the Olympics, he knows that the hopes of the whole nation are upon him and he will do his best to make them proud.  He wants to be an inspiration to children and young people that they should believe in themselves and have hope for a better future.

Phetetso rides for the ACE-The Sufferfest Lesotho MTB Team – the only UCI Registered mountain bike team in Africa.  The team identifies potential cycling talent from impoverished areas of Lesotho (many of them are orphans) and gives them an opportunity to reach their dreams through cycling.  Any excess funds raised from this campaign will be used to equip or support other riders through this team initiative.

Read about our team from a recent article on the International Cycling Union (UCI) website here.

Join Our Team and Spread the Word!

Thank you for supporting our team!  We always refer to our supporters as #DreamMakers and now you are one of them.  Please spread the word so that we can reach the goal and make Phetetso’s dreams come true.

Mark West is managing the funds for this campaign. The campaign is for a personal cause.