Help Fix Mimosa, Hit by a Car
Contribute
Campaign extended! Our deadline has passed but you can still help. ✕ 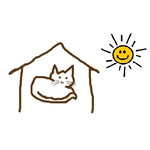 By Half the Way Home
Organization campaign Keep it all
Marietta, US

Half the Way Home hasn't added a story.

It was cold, and everything hurt. Mimosa laid his head on the asphalt and prayed the pain would end.

It had been a normal day—he had been wandering around, looking for something good to eat, when something scared him. Maybe it was a predator, or just a branch falling; Mimosa couldn't remember. Whatever it was, it caused him to run out in the road.

The driver had left him for dead. The human hadn't even bothered to slow the car down to see what they had hit; they didn't care. So Mimosa lay there, shattered and bleeding, wanting nothing more than the end to come sooner rather than later.

To his surprise, Mimosa didn't die. Some nice humans did stop, and they took him to a place that smelled of other cats and dogs. They put him in a warm cage with towels to keep him comfortable. The humans looked worried.

"He needs help NOW," one said. The other nodded.

Luckily for Mimosa, it's the season of miracles. Half the Way Home learned about his story and whisked him off to the vet to see what could be done to save his life and fix him. Mimosa purred. Not all humans were bad after all.

Mimosa's legs are broken or fractured in at least four different places. His pelvis is still attached to his spine, but it's unstable. He is going to need extensive reconstructive surgery to be able to walk again. We have spoken with the veterinarians at Fayetteville Animal Hospital, where Mimosa is receiving treatment, and they truly believe that this surgery will give him an amazing quality of life.

The surgery is expensive. If everything goes well, it's going to cost Half the Way Home $2,000. If there are complications, it could be even more. But Mimosa's life is absolutely worth it to us, and we know there are wonderful people out there who will help us raise the money. We have authorized Fayetteville Animal Hospital to go ahead with the surgery to put Mimosa on the road to recovery.

Mimosa is in great hands at the Fayetteville Animal Hospital. They absolutely adore him there. One of the technicians told us that despite Mimosa's obvious pain, he is constantly purring, and he eats enthusiastically. We can only imagine how much he wants to get up and play!

We know this surgery will help Mimosa to be the happy, healthy, and bouncy kitten he was always meant to be. Can you help us to raise the funds to pay for it?

Half the Way Home, Inc., is a 501(3)c nonprofit cat rescue. We focus on Georgia's forgotten cats, the cats no other rescues will save from Animal Control due to their condition, age, behavior, or expected cost. Mimosa would have had no chance at Animal Control without Half the Way Home. The extent of his damage, and the cost of the surgery to fix it, is just too much for most rescues to handle.

Mimosa would have been put down the day he was found if Half the Way Home had not taken him. As it is, he is incredibly lucky to be alive after being hit by a car. Let's keep this boy's luck going and raise the $2,000 for his surgery! Can you help us, please?

Half the Way Home hasn't posted any updates yet.
Newest | Oldest
Show more
NEW Thank you emails can now be sent directly from the Transactions page.
Alternatively you can still leave a comment here.

Half the Way Home is managing the funds for this campaign.