No thanks
Helping Hooch
SubscribeUnsubscribe
✖
Gallery (1) 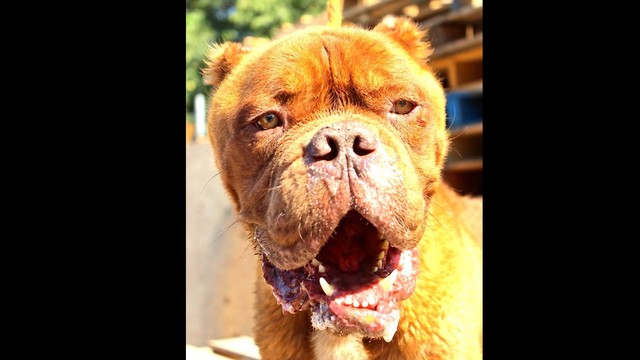 HOOCH UPDATE: First things first, Hooch is safe and resting comfortably with one of the worlds greatest Vet Techs as her Queen, Andrea Bertolucci. I'm going to break up his story in to pieces so that we can comprehensively approach helping:

1)WHAT HAPPENED TO HIM?: We rescued Hooch from the Bakersfield Shelter on Monday. It was obvious that his ears had been recently cut off (not cropped but butchered), he was severely malnourished, suffered from a terrible Upper Respiratory Infection and had several lacerations around his mouth and what appeared to be a broken or dislocated jaw. When we examined him today to ready him for x-ray, we discovered that his tongue, much like his ears, had been cut off.
2)WHAT IS BEING DONE MEDICALLY?: Because Hooch basically can't eat or drink, he's having a feeding tube implanted tomorrow so that he can start packing on the pounds, which he desperately needs. He is about 35lbs underweight, weighing in at 66lbs when I weighed him upon first reaching the Vet. Hooch is also battling a slight pneumonia which has cleared considerably since we first met him at the shelter a few weeks ago. We have had several dogs with cleft palate's, which poses a similar problem, and we have treated those dogs by teaming with The Mia Foundation( Love For Mia - Cleft Palate Chihuahua and a group of oral surgeons at Cornell University. We have reached out them and are expecting to hear back soon. We have also reached out to friends of ours at Purdue and UC Davis, two of the best vet schools on the planet. We have been giving him Sub Q fluids all day (camel-backing) which he has been soaking up. He is extremely dehydrated and, from what we can tell, has been attempting to drink by sticking his head deep in to the bowl. We honestly can't tell if he's getting water because he has no "gulping mechanism" and makes such a mess when he tries.
3)WHAT CAN YOU DO TO HELP?: Having previously stated all of the ways we are being proactive doesn't mean that we've figured it out or that this problem is solved. We obviously need to raise money to treat Hooch, which will be costly. By following this page and our rescue, you'll be along for the ride and we'll be completely transparent. The best thing you can do is SHARE HOOCH'S STORY WITH ANYONE YOU THINK SHOULD KNOW. If you have Veterinary friends, ask them; if you've had experience with anything like this, please share; if Hooch looks familiar and you may know who did this, please contact us-- we have friends in Law Enforcement who can take the proper course of action. SHARE, TWEET, EMAIL, CROSSPOST and spread this story anyway you can because standing up for Hooch is standing up for Dogs in general and for the helpless in general. By being a part of this story you can help shift a paradigm that has stalled in many parts of this country and the World. There is an element of our society, of our culture, that views dogs as property, as exploitable, expendable entities that hold no emotional value; we that disagree with that view MUST STAND UP and let it be known that these are our FAMILY MEMBERS and that they are to be loved like family and treated with dignity.
4) WHAT IS THE FUTURE FOR HOCH: He's going to be just fine. There is an army of people (including yourselves), we call ourselves the Mutt Militia, who will insure that he will be as happy as possible. We'll spend the next few days closely monitoring his health and brainstorming ideas on how best to move forward with his treatment. We've got cooling vests from England on there way,to help regulate temperature and I'm sure dozens more offers will pour in from those of you who can help and have brilliant ideas to help better his quality of life. Spending time dwelling on those that tortured this dog is futile and only gives them power, the best thing you can do right now is jump in this fight with your heart and your head because with all of this attention and cohesion, we can make a huge difference!!!
WELCOME TO THE MUTT MILITIA! 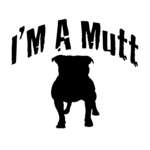 Marley's Mutts Dog Rescue is managing the funds for this campaign.