No thanks
Wyoming the Lab Mix Pup
SubscribeUnsubscribe
✖
Gallery (10)

Wyoming, a Story of Hope
Wyoming is a seven month old lab puppy found May 10th lying in a glass filled mud puddle, in the cold rain. He had been hit by a car and left to die on the streets of Detroit.
But this was not his fate. He had been hit outside a school and was found by two teachers. Two teachers soon became ten; they were joined by parents, students, passersby, construction workers and a police officer. Wyoming, still shivering wagged his tail and won the hearts of all.

But who would help Wyoming?
Love alone would not fix him. Several local humane societies and animal services were contacted and all offered to euthanize this sweet baby but he was destined for more. Finally we found Homeward Bound Rescue League of Michigan. They did not question the cost and told us to take him directly for evaluation. His right rear leg broken, his left rear foot shattered beyond repair. Surgery would be extremely expensive. The people at Homeward Bound didn’t even blink!

Hope restored.
Wyoming has gone through two surgeries this week and has undergone a leg amputation. He has a long road to recovery but a long happy life will follow. Wyoming may have been hit and left but a community with little reached out with all they had. He has become a school mascot and a life lesson for the nearly 1,000 students who now know his story. We are hoping to help raise money for the rescue that saved Wyoming, lifted the spirits of a community and helped teach such a valuable lesson of compassion to so many students. Please help Homeward Bound Rescue League continue to play such a valuable role in our community and the lives of so many animals.
Thank you so much!

Wyoming's initial quote for surgery was $2,500 from Advanced Veterinary Care Group in Canton and he was initially evaluated by our wonderful vets at Healthy Paws. Wyoming is not yet ready for adoption, but is under the care of Homeward Bound Rescue League in a private foster home. As we get to know him and have more details about his exact bills and surgery, we'll share more. Today, we wanted to make sure his story was shared! 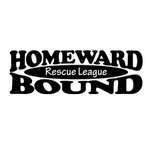 Homeward Bound Rescue League is managing the funds for this campaign.