No thanks
Calling All People: Documentary Film
✖
Gallery (3) 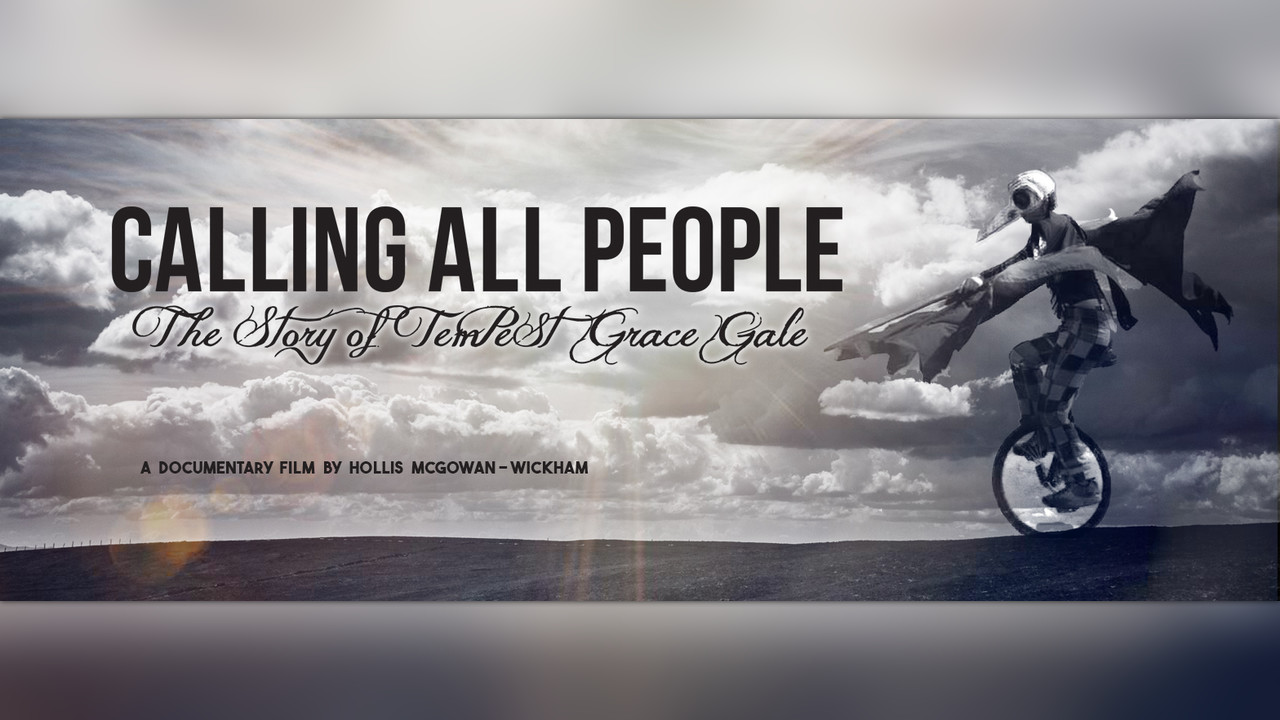 Calling All People: The Story of TemPeSt Grace Gale hasn't added a story.

Originally from California, TemPeSt and her parents, Jazzmyre Corrigan and Michael Gale, discovered Hornby Island, B.C., while visiting the Pacific Northwest Coast. Knowing it was home, they settled on the small, Northern Gulf island which exists about a seven-hour journey north from Vancouver, B.C., the province’s largest metropolitan center.

What the close-knit community of Hornby and surrounding areas were able to provide TemPeSt in terms of art and culture resulted in a young, passionate, creative force to be reckoned with. By her early 20s, TemPeSt was active throughout North America, performing and making connections among other artist communities, gaining a notable reputation for her talent and unique vision. Both as a solo performer and with others, TemPeSt shared stages with performers such as DOA, No Means No, Ember Swift, CR Avery, and Joey Only. As a spoken word artist, musician, circus performer, puppeteer, and doll maker, TemPeSt inspired many across all walks of life to seek truth and authenticity in their own lives and endeavors. 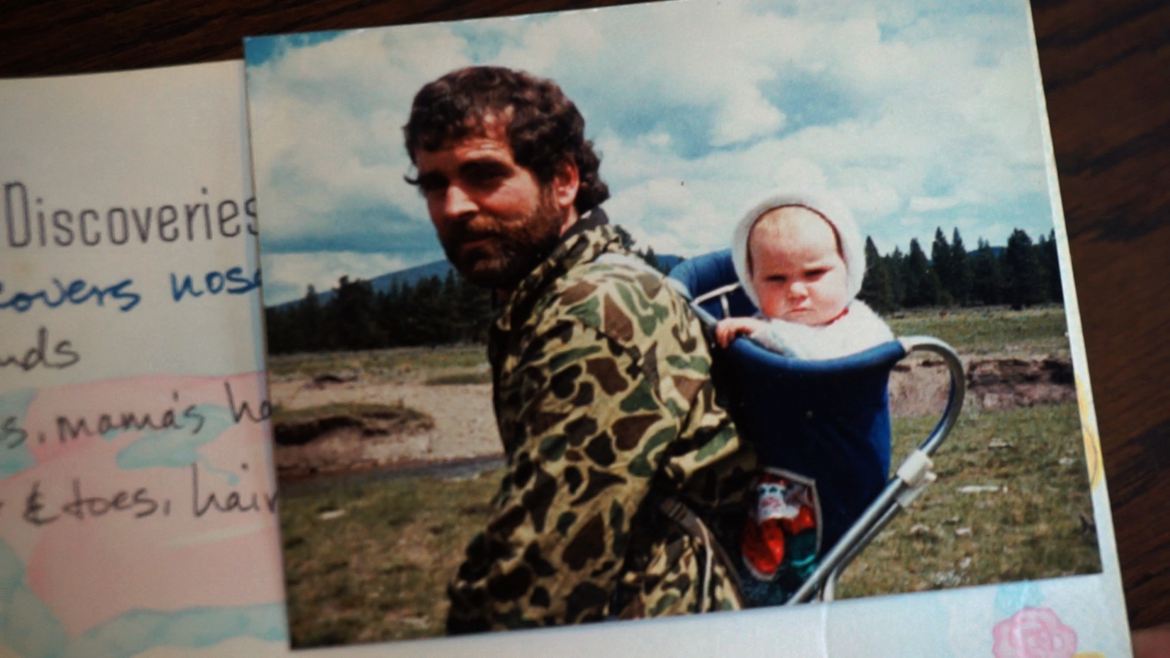 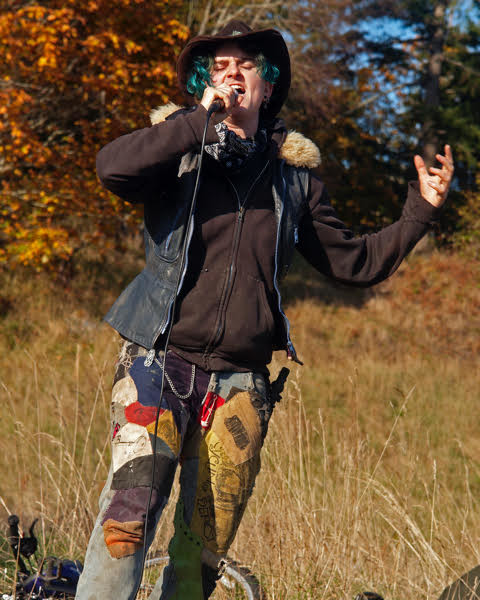 (Photo of TemPeSt above was taken on October 24th, 2009 at the Hornby Island 350 gathering during her performance of "Calling All People". Photography by Will Thomas. https://willthomasonline.wordpress.com/about/)

Within the last few years of her life, TemPeSt was filled with conviction to spread a message. In her poem,  Calling All People, she put out a radical call to action against political systems of oppression, and to unite people across all boundaries and borders in a pursuit to save humanity and the planet from destruction. In coming together and battling these systems, TemPeSt hoped to see the unification of “all people” to "come together! Make this world better!" 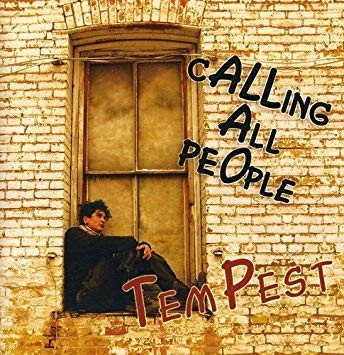 On November 17th, the body of TemPeSt Grace Gale was found dead in Ford Cove Marina on Hornby Island. She was 25 years of age. Within 24 hours, police investigations had concluded that it was a homicide, the first known murder on the tiny, secluded Northern Gulf island. After holding the only known suspect in custody for a period of 24 hours, the suspect was released under no charge. Police informed the public that they did not have enough evidence to convict him, and therefore, let him go.

In the wake of the devastation, many responded by pursuing their dreams and passions from the experience of losing such a strong and vital force. A number of artists across a variety of mediums have attributed their work and success in their careers to TemPeSt. After she passed, many songs and poems were written for her, drawings and paintings done of her, radio shows and also a stage at a festival were all dedicated to her. In more recent years, two babies have been named after her, and even a humpback whale sited circling Hornby Island in 2017 was given the name Tempest after TemPeSt Grace Gale by the Marine Education & Research Society. 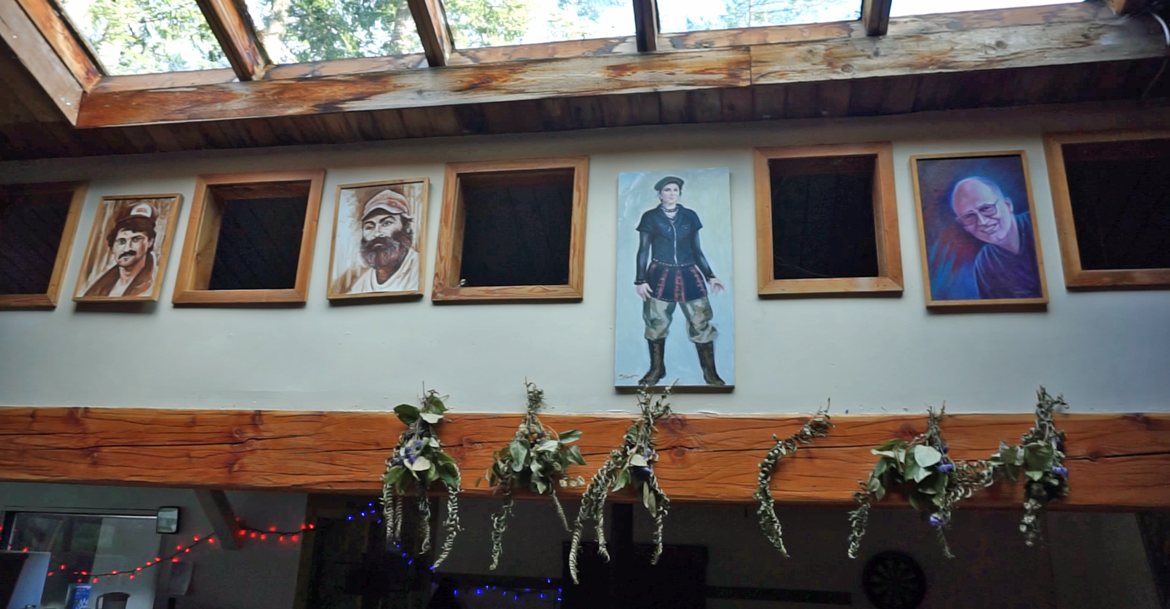 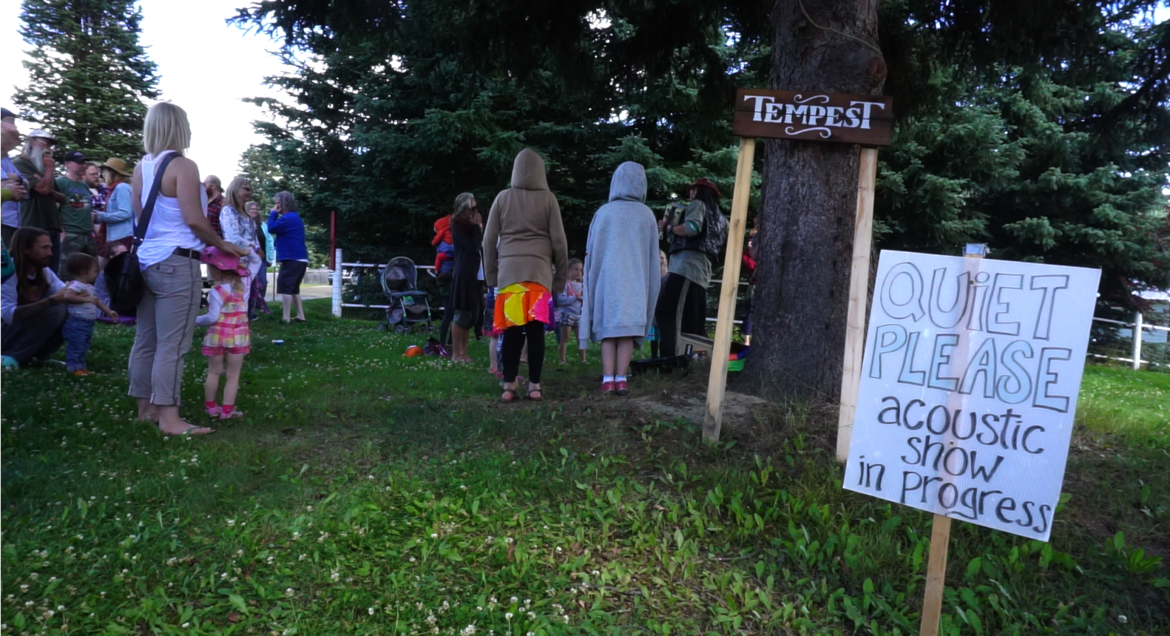 Today, TemPeSt's death remains unresolved and communities across North America in various stages of recovery from the trauma of the loss of the young, dynamic Canadian artist. Yet, under the surface of a tragedy lies a powerful force, a TemPeSt wind, that still blows strong in the hearts of many.

My connection to the story:

My name is Hollie McGowan and I am writer/director/producer of the documentary film, Calling All People: The Story of TemPeSt Grace Gale. Growing up on the West Coast of British Columbia, I spent my first few months as a newborn on Hornby Island, and since then have been returning every so often to spend time with family, friends, and the land itself.

In the summer of 2013, I went up to Hornby for an extended visit after being out of the province for over a decade. At the time, it had been almost four years since her death, yet the island still bore the imprint of TemPeSt’s memory everywhere from inside peoples’ homes to the public spaces. I also realized that not only had she made such a strong impact on Hornby, she had made a strong impact on so many others across North America. 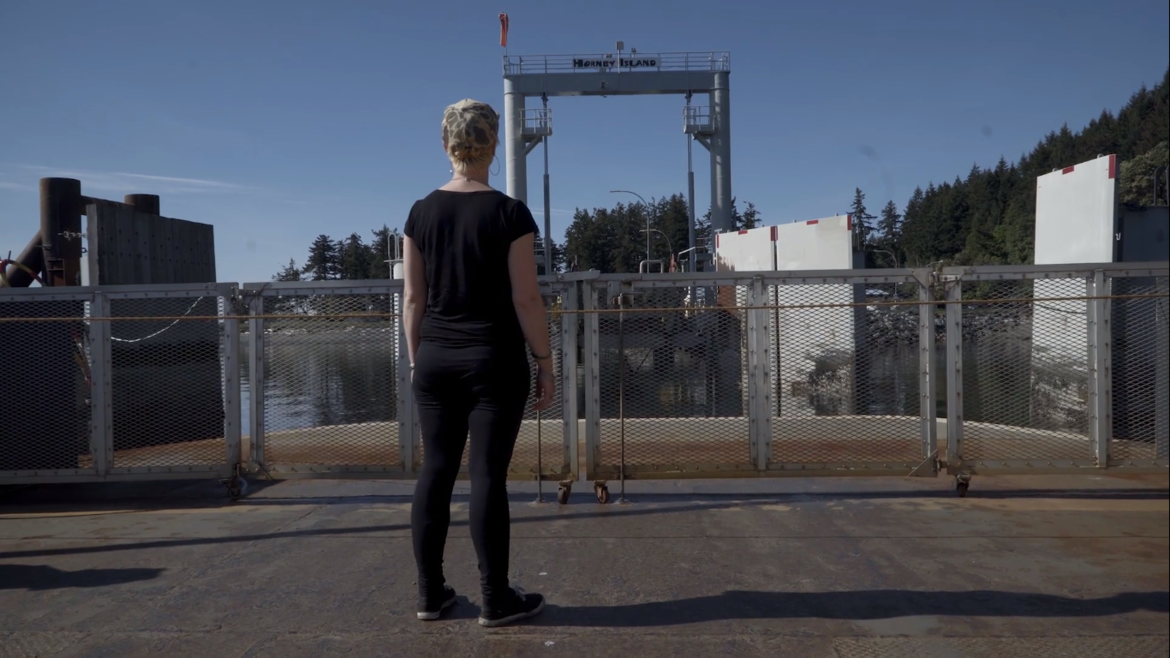 TemPeSt was a unique individual with a strong desire to spread love, understanding, and compassion beyond all borders and boundaries, and in 25 years had succeeded in doing what she could. After that visit in 2013, I realized that her story and the impression she had left on people was something especially powerful, inspiring, and worth sharing with the rest of the world.

My journey with the film and where I am at now:

Since beginning this project in 2016, I have now completed the development and production stages of the documentary filmmaking process. With only a few more things to capture on film, production has come to 90% completion. Over the past three years, I have traveled throughout British Columbia to several locations in which TemPeSt was very active and loved by the communities, as well as contacted and involved others in other parts of the U.S. and Canada who were impacted by this truly unique individual. I have made the journey to the town of Wells to visit ArtsWells: Festival of All Things Art, to the city of Victoria, and back up to Hornby Island. During my second trip to ArtsWells: Festival of All Things Art in 2017 while still in the beginning stages of production, I met and hired cinematographer, Eric Welscher-Bilodeau, who joined me in shooting the remainder of the film. With his assistance, I now have recorded interviews with over 21 different people in a variety of relations to TemPeSt and have shot over 20 hours of footage to be used in this project. 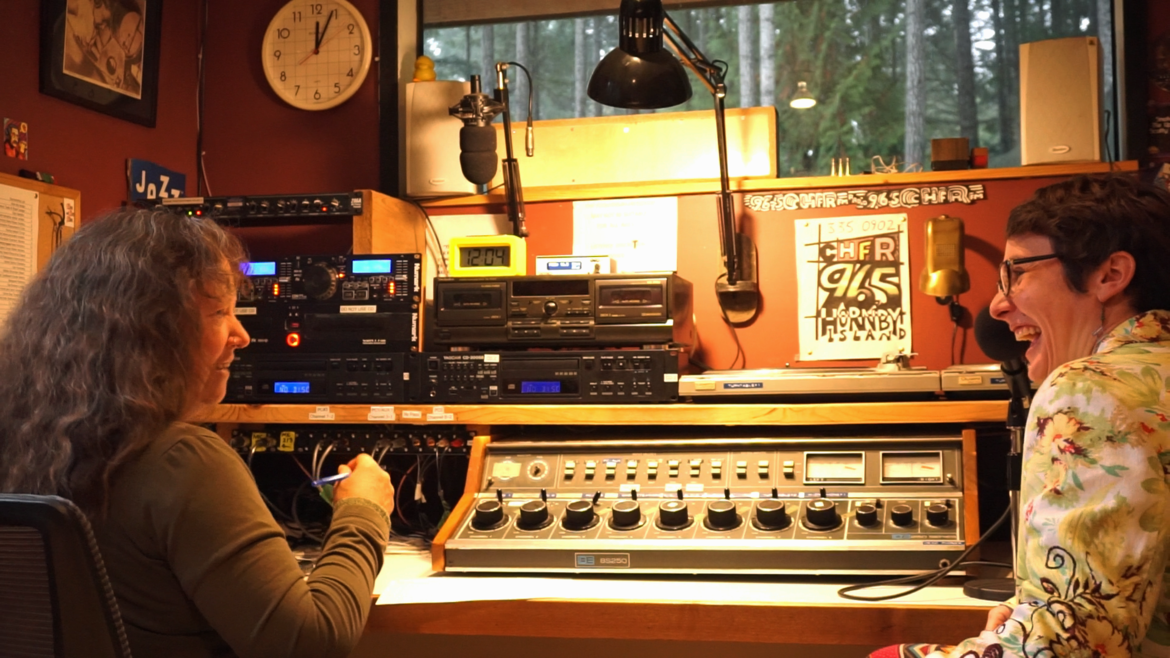 After capturing the majority of what I needed on camera in 2017 and 2018, I returned to my computer to transcribe all of the interviews and work on my paper edit (the first step in the documentary filmmaking post-production process in which the filmmaker creates a narrative based on all of the interviews gathered).

This winter, my editor, Sonya Chwyl, and I are ready to begin the editing process! We are excited to dive in and start collaborating to piece all of the footage and interviews together to create a feature documentary film. With just a tiny bit more to get on camera, we are almost there!

So far, the funding for this project has come from my first crowd fundraising campaign in which I raised over $9000, other individual financial contributions, and my own pocket. Now that I have began entering post-production, I am asking for assistance with the remaining costs of production and editing. With your generous donations, we will be able to make it through this next stage of the documentary filmmaking process. Every little bit adds up and makes a difference! Please help me complete this project and share this incredible story!

Please consider making a donation today and sharing on your social media networks.

About the post-production team:

Hollie McGowan is a freelance writer and music journalist based out of Vancouver, BC. She was first learned how to make short films as a young teen at the Gulf Island Film and Television School on Galiano Island, BC in 1997, 1998, and 1999.

Following the completion of her degrees and a relocation back to her West Coast roots, she became active as an electronic music journalist based out of Vancouver, BC, reviewing shows and festivals, covering stories about B.C.’s electronic music scenes, and interviewing artists both local and international. In addition to her work as a music journalist, she also has experience as a freelance writer providing web and blog content, artist and company bios, press releases, and grant writing services to clients working across a variety of art mediums.

This is Hollie McGowan's first feature documentary film in which she is working as the writer, director, and producer.

Sonya Chwyl is an editor, writer, and filmmaker based out of Victoria, BC. She first learned to edit with Windows Movie Maker on her parent's computer, and has since worked on shorts, documentaries, and promotional videos in a variety of roles.
In her work, Sonya draws on her professional writing background and her training in improvisational theatre to create compelling narratives with a queer slant. In 2019, she co-wrote and co-directed her first short film, "Baby Teeth," with creative partner Anik Desmarais-Spencer. "Baby Teeth" has since screened at festivals around the world, and was recently awarded the title of Outstanding BC Film at Short Circuit Film Festival in May 2020.
Sonya is active in the Vancouver Island Film community and currently serves as a member of the Cinevic Board of Directors.

See all activity55
NEW Thank you emails can now be sent directly from the Transactions page.
Alternatively you can still leave a comment here. 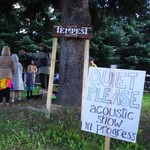