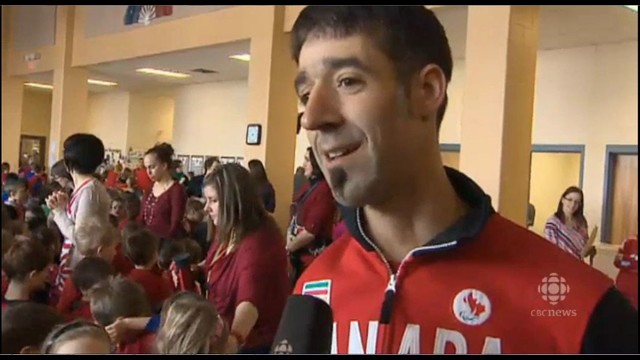 New Brunswick para-nordic skier Louis Fortin plans to represent Canada at the 2018 Paralympic Games in Korea. To get there, he needs to raise $75,000 to support expenses related to training, competing, equipment, travel and daily living. Support from donors and sponsors will be critical to realizing this goal.

Originally from Shippagan, Fortin now lives in Fredericton with his wife Sylvette and two children. . Off the ski trails, Fortin is a science and mathematics teacher at High School level. He is a graduate of the University of Moncton in forestry and worked in the field prior to becoming a teacher. He studied Education at UNB. He only started cross country skiing in 2010 when he was 32 years old.

Going to the Paralympic Games wasn’t on Fortin’s radar when he started cross-country skiing competitively in 2010. Fortin, a one-arm amputee, had always enjoyed playing numerous sports. But when three para-nordic skiing spots opened on the New Brunswick team for the 2011 Canada Winter Games, a local coach suggested Fortin should pursue a berth. At the Games, Fortin won two silver medals and his competitive career was launched. He has since competed at many World Cup events in the past five seasons, his best result a sixth place finish in the long distance event in 2012.

In 2014, Louis Fortin secured a spot on the Canadian team for the Paralympic Games in Sochi, Russia, racing in the middle distance and sprint events. The following year, he competed for New Brunswick in the 2015 Canada Winter Games, bringing home two gold and one silver medal.

Despite losing his right arm, shoulder, collarbone and shoulder blade in a battle with cancer at the age of 13, he leads a pretty normal life. He tries to put his misfortune to good use by always seeing the bright side of things. This philosophy brought him many places in the last 25 years. He has travelled around the world, spending a year studying in Belgium, six months in England as a bartender, two Ultimate Frisbee World cups in Italy and many more adventures.

His athletic abilities and his leadership have helped him tackle many training and competition facets. These abilities are essential to his present success.

Louis Fortin, a one-arm amputee, has always enjoyed playing numerous sports. He also enjoys spending time outdoors, spending time with his family and friends. His passion is inspiring people to surpass themselves, to promote healthy lifestyle and work towards helping people finding their paths.

Louis Fortin is managing the funds for this campaign. The campaign is for a personal cause.