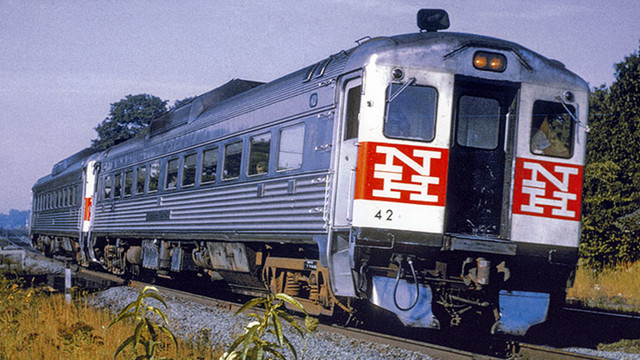 What is the New Haven 42 "Firestone" and why should continued to be preserved?

The late 1940s brought about substantial changes in U.S. consumer culture and patterns of movement. Wartime rationing and the worst economic crisis in the nation's history had greatly limited the purchasing power of the average citizen. As factories returned to peacetime production, an unprecedented demand for consumer goods, including automobiles, fueled not only an economic boom but significant changes in the landscape of America. Suburban lifestyles became the center of the "American Dream" and the construction of the Eisenhower Interstate Highway System promised boundless freedom.While chrome fins and drive-ins were defining a new era, railroads began to suffer. With gasoline and automobile production rationed, railroads enjoyed 90% of all domestic passenger travel during the war. By 1957, though, miles of operating passenger trains had dropped 30% and air travel was providing even greater pressure. These changes were most readily apparent in small towns throughout the U.S., who's declining ridership forced railroads to reduce or altogether cancel passenger service. However, the Budd Company of Philadelphia saw an opportunity.

At the time of the introduction of the Budd Rail Diesel Car (RDC) in 1949, the concept of the self-propelled passenger rail car was not new. There had been unsuccessful iterations in the 1920’s and 1930’s but the lack of available technology was a barrier to its practical success. However, in the post war years, the Budd Company’s previous experience paid off. Combined with new developments in body construction along with diesel engine and hydraulic transmission technology (a product itself of World War II), the Budd Company designed a rail-car that could not only meet the demands of the changing demographics but due so in an economical way.

On Sunday, September 4, 2016, the gates of the Old Colony & Fall River Railroad Museum were locked for good, ending a 30-year history of educating young and old alike about railroading in southern New England. Years of declining attendance and low revenue left the museum's administrators no choice.   "We just can't pay our bills," OC&FRRM President Jay Chatteron remarked to the Herald News. However, artifacts, both large and small, including a 1951 Budd "Rail Diesel Car" that once carried passengers throughout Massachusetts, Connecticut and New York, remained. It's fate hung in the balance... 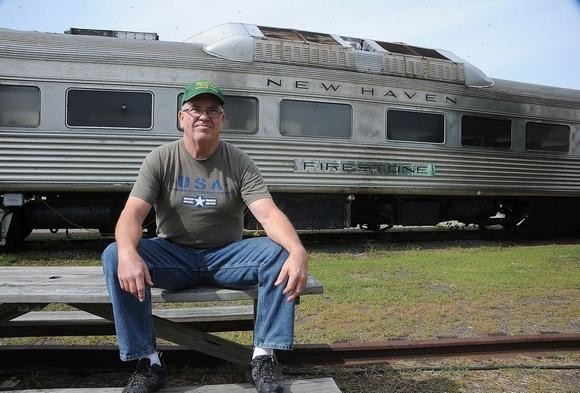 Sell, Scrap or Save

Faced with a dilemma not uncommon to rail preservation organizations, the OC&FRRM did not wish to waste the years their dedicated members had spent preserving significant pieces of New England railroad history, particularly NH 42 "Firestone." Searching for an appropriate home, the Berkshire Scenic Railway Museum (BSRM), located in Lenox, Massachusetts, was identified as potential home, particularly given their growing fleet and expertise related to "Rail Diesel Cars."

Berkshire Scenic Railway Museum, Inc. (BSRM) is seeking dontations for the restoration of running gear on Budd RDC #42 that is currently owned by BSRM. Donations would be used to repair and installation of wheels, disc brakes and drive gear as needed. The running gear restoration is only part of a larger project for full mechanical and cosmetic restoration of RDC #42. The purpose behind the full restoration project is to use RDC #42 in passenger revenue service on the Hoosac Valley Train (HVT) service between Adams and North Adams, MA. Ultimately, the goal is to have the RDC #42 return to its home rails on the Berkshire Line, should BSRM be successful in restoring tourist passenger service there.

Current and imminent priorities for the running gear project include replacing two wheel/axle sets. Axles have been shipped for inspection to a qualified shop and are awaiting funding for repair and installation work to begin. However, prior to that, BSRM is in the process of replacing/repairing air brake cylinders and valves. Our goal is to have air work complete within two months then move the car to North Adams where the remaining restoration work will take place.

The larger project goal is to achieve a complete mechanical restoration which in addition to the partial project listed above, includes replacing a missing drive shaft, rebuilding and installing an in-house spare engine for one end; fixing electrical wiring damage; and repairing and installing radiator sections. Cosmetic repairs for full restoration include replacing all windows, replacing luggage racks and repairing the floor at one end of car. The rest of the interior was restored to 1953 specifications with the exterior restored to New Haven McGinnis RDC livery including the historic Firestone nameplates.

The current running gear project of repair and installation of wheels, disc brakes and drive gear can be delineated in a timeline as follows:

A tentative schedule for additional repairs need for the entire restoration project would include: 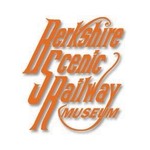 Berkshire Scenic Railway Museum Inc. is managing the funds for this campaign.