Thank you everybody. Our campaign is now over. ✕
Caroline's Road to Recovery
✖
Gallery (1) 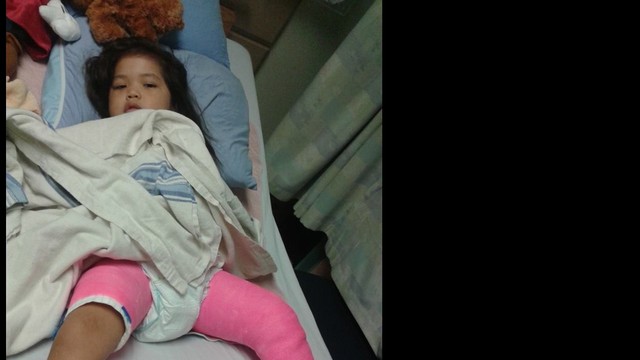 Please consider a small donation to help keep Caroline’s family close as she recovers from a tragic car accident.

Caroline is 4 years and 6 months old. She was a happy and very healthy child. Until the one day when tragedy struck (literally). So here’s what happened.

I moved to Bella Bella BC on June 2nd, 2014 to work as a Event Planner/Executive Assistant for Tribal Journeys 2014 Qatuwas Festival. I took Caroline with me because my two boys were still in school and my husband stayed back to take care of the last few weeks of school.

We moved in with my mother Larene, who generously offered to babysit Caroline while I worked. I had been working for about three weeks and things seemed to be going amazing!

Until the afternoon of June 25th. My mother and daughter started to walk to the local clinic for an appointment my mother had with an eye doctor. They had made it approximately half way there when a truck turned the corner in front of them and swerved toward them (they were on the side of the road). My mother saw this and she moved them further off the road. In my mothers own words, “It seemed like she was aiming for us”

While on the ground my mother said she could not see or hear anything, and her worst fear was that Caroline had not survived. My daughter gasped, and then started to moan. My mother could not get up. She tried but to her dismay she couldn’t get up to see how Caroline was.

Luckily passersby saw the two on the ground, and came to see if everyone was ok. Two people helped my mother to a move comfortable position, and another took Caroline into her arms.

People called the ambulance, but because there was no driver for the ambulance, it took 45 minutes of excrutiating pain for both my daughter and mother before help arrived.

Police were on scene, and did little to assist. Not even keeping people back from the scene.

Thankfully someone came to my office and told me what happened. I rushed to my families side, not sure what had happened, but fearing the worst my heart hammered in my chest. As I came on scene my eyes could not understand what I was seeing.

We finally reached the hospital, and Doctors who had little equipment in the small hospital worked tirelessly with what they had to get her more comfortable atleast. We were medivacced down on a airplane at 10:30 at night.

We arrived at BC Childrens Hospital at 12:00 and they worked through the night to splint the leg until a traction could be set up.

At first we had just thought there was a break in the femur. In the next few days we came to realize that there was also a chip on the upper pelvis and a fracture of the ischium.

On July 9th 2014, we brought her to surgery to have a hip spica cast applied. On July 11th we were discharged.

During this time I had hired a lawyer, and to my dismay the driver was insured in Alberta, so ICBC declined to help with any equipment costs.

Thankfully our lawyer has helped by renting a wheelchair on a month to month basis. However we did not receive that until July 21st 2014.

We are mobile now, but at a cost.

As many of you may know, there are many hoops to jump through to get insurance to pay out due to accidents. So we do not expect to see anything in compensation for this accident for atleast a year, perhaps even more.

Since the accident I have not worked, nor has my husband, because taking care of Caroline is a two person job at the BEST of times. I had a full time job before the accident which kept us afloat, but now I don’t.

I have a small amount of money in savings account to cover cost of rent for a few months. However, in a months time I will have to bring Caroline back to BC Childrens Hospital to have the cast removed, and then perhaps have a stay in a physiotherapy facility, so she can learn to use her legs in a safe environment, as well as strengthen her muscles in her legs.

I am loathe to ask for help, but unfortunately this is the LAST resort for our family. I ask for a small donation to help our family cope through this dreadful time! Thank you so much, your donations are definitely appreciated, and will be put toward travel, food, and accommodation for myself as we bring her back to the hospital. Myrna Jackson hasn't posted any updates yet.
Newest | Oldest
Show more
NEW Thank you emails can now be sent directly from the Transactions page.
Alternatively you can still leave a comment here.

Myrna Jackson is managing the funds for this campaign. The campaign is for a personal cause.