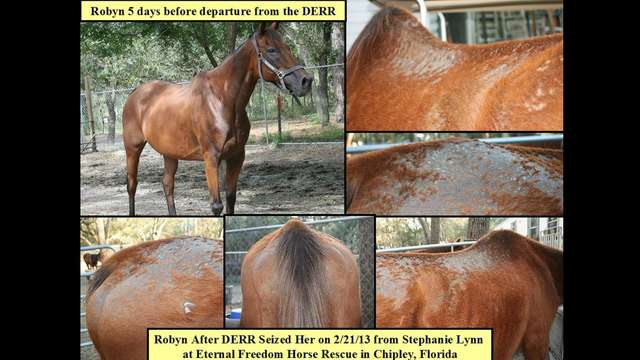 $530 raised 53% of $1k goal
7 contributors
7 Years running
Contribute
By Domino Effect
Are you friends?
Personal campaign Keep it all

The Domino Effect Rescue Ranch needs assistance towards the medical expenses and care towards Robyn.

PLEASE READ & SHARE ROBYN’S STORY, so that she too can receive the best possible care that she so richly deserves!!!

Robyn came to the Domino Effect Rescue Ranch, along with Duckie, Jack, and Jill back in May 2012. All 4 Thoroughbreds came in at a level 2-3 emaciation. Over a period of a few months, Bob was able to clean them up and build a significant amount of weight back on these 4 beauties. Their rehabilitation was soon to be complete, when we received a text from Stephanie Lynn at Eternal Freedom Horse Rescue asking us if she could relieve us of overcrowding by taking a few Thoroughbreds off our hands.

Stephanie Lynn sent an e-mail request to take horses off our hands to help relieve our overcrowding back in September, 2012.

After we received this e-mail, Bob received a phone call from Stephanie Lynn. She stated that she was paying $500 for a transport to come down and pick up a horse from TROT and she had 3 open spots. She explained that the transport would cost her $500 whether she had 1 spot filled or all 4 spots filled. She told us that she was a Thoroughbred Rescue and asked if we had any Thoroughbreds that she could help us rehabilitate and rehome.

Bob probably had 8-9 Thoroughbreds at the time and told her that he could indeed send some her way to ease some of the overcrowding here at the rescue. We checked her out to find that she indeed was listed as a “nonprofit” and scheduled with her for the horses to be picked up on Labor Day.

Over the course of 5 months, I frequently went to her page and website to see updated pictures, but did not see anything new after the month of September.

In December I saw a Christmas advertisement from Eternal Freedom going through my news feed on Facebook. All 3 horses, Jack, Jill, and Robyn were listed at rock-bottom prices as a Christmas Adoption Special. I wondered why she was adopting these horses out as such a low fee, so my concerns took me back to her page and website once again to see if I could find an updated picture of them, but still nothing past September 2012.

In January, Clairese Austin shared an “SOS” that Stephanie Lynn had posted threatening to euthenize the horses if people did not come get them or send donations.

This was horrifying to me. She posted in black & white that the 3 horses we sent to her she was threatening to euthenize.

I had nightmares that whole night after reading this. When I awoke the next morning, I told Bob about Stephanie Lynn’s intentions. That morning Bob called her and they spoke on the phone for quite some time. She reassured Bob that someone gave her this advise to make these threats in hopes that the public would send her donations. She said that she had to move horses quickly because she had a shipment of BLM horses that were to arrive within a few days. Bob explained to Stephanie Lynn that her public post was very damaging to her reputation as a rescue. She is a community service in which the public holds her accountable to care for and rehabilitate these horses and place them in good homes, not to dispose of them at her convenience.

When I asked Stephanie Lynn about the well being of the 3 horses we sent to her, she replied that these 3 horses no longer belonged to us and they were none of our concern. I told her that she would be accountable for these horses and that as a “nonprofit” the public has a right to all information of her facility if asked. She blocked me on Facebook shortly thereafter.

Another week passed and Bob received a phone call from a gentleman warning him that these horses were in danger of their livelihood.

By the end of January, we received a phone call from a woman who had adopted Jack and Jill. She found us through our vet. She received a black and white coggins from Stephanie Lynn for these 2 horses with our information blacked out and the 2 horses ages changed. She had been told by a government agency that she had to track down the original coggins or have another one pulled because after Stephanie Lynn altered this coggins, it was no longer valid.

As we spoke to this lady, she started to uncover truths about Eternal Freedom. She said that Jack & Jill were in very poor condition, unlike the way we last had seen them. She sent me pictures of Jack and Jill from just 4 days after she adopted them and they had left Stephanie Lynn’s place at Eternal Freedom.

She sent me these pictures via e-mail, both Jack & Jill were level 1-2 emaciation. As horrifying as this was, we trusted that Jack & Jill had found their forever home and would be well taken care of, so we put this to rest.

Within 2 hours-time we raised the fuel cost to make the trip to Chipley, Florida, up in the Panhandle. We arrived last Thursday, February 21, 2013, unannounced. Chancey stepped to Bob asking what his business was to being on the property. Bob told him that he was there to pick up Robyn. He did not appreciate what Stephanie Lynn had done to his horses and he was there to remove Robyn. Chancey threatened to throw Bob off the property, but of course, Bob was not easily persuaded. Chancey went in to contact Stephanie Lynn to find out what was going on. He came back out and agreed that Bob did indeed have the permission to remove Robyn.

Chancey went into the paddock where Robyn was and brought her toward us. As she neared our presence, the bare patches of hair and bright, pink, fleshy wounds became apparent all over her body, even on her ears. She was covered with SEVERE rain rot.

Robyn wasted no time whatsoever loading on the trailer. She leaped in and off we went. We traveled a short way home through Tallahassee and pulled off into a truck stop where we slept for 6 hours in the truck. After a nap, we ate some breakfast, stopped for some coffee, and we were back on the road.

When we arrived back here at the Domino Effect Rescue Ranch, we called Dr. Brian Dillard with Blue Skies. Within 1-hour’s time, he was out to the ranch and did a complete check up on Robyn and a followup on Indy.

Due to the urgency of this visit and the lack of funds, this bill is still unpaid with the expectancy to be covered within a timely manner.

Just upon arrival, Robyn’s expenses have risen well over $600 just in transport and vet visit. She will need to be scheduled for a farrier visit and will need extensive treatment with rain-rot products to treat the SEVERE skin disease, which covers her entire body from the untreated rain rot. Robyn has a blown knee from a previous Racetrack injury back in her racing career. She should be treated daily with a Joint and Muscle supplement to control the swelling and inflammation of her knee and other joints. Robyn appears to have been ridden in the recent past due to the great amount of swelling that was seen to her knee when we picked her up.

Robyn has been classified as being a level 2 emaciation by Dr. Brian Dillard. This is the second time in 1-year’s time that Robyn has been starved to emaciation and may suffer damage to her internal organs as a result. We are still waiting for the final report of her blood work and exam. Robyn is going to need a very fine-tuned diet to build her weight and health back up to where she needs to be.

As you can see, Robyn who is just 12-years old, is going to need some extensive TLC to rehabilitate her from the severe neglect that she has suffered.

Will you sponsor Robyn and provide for her road to recovery? Any amount towards the cost of her care would be an absolute blessing. We encourage those who are able to help in the animal’s support, as there is so many more waiting in line for a second chance, but so little funds to cover everyone’s needs.

Thank you all for your support and may God bless you for your giving!!!

See all activity9
NEW Thank you emails can now be sent directly from the Transactions page.
Alternatively you can still leave a comment here. Domino Effect is managing the funds for this campaign. The campaign is for a personal cause.