No thanks
Help for Sketch and her Daddy
✖
Gallery (1) 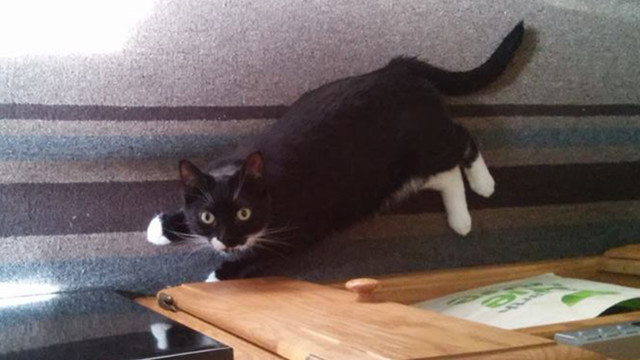 First, thank you to everyone for taking the time to read this and help us raise $485.

I'm a concerned friend of a local man in town. I don't want to name him to protect his privacy. I've been helping him with his cat named Sketch. Sketch had been seriously abused by her former owner and this man rescued her. When I first met her to feed her while he was in the hospital, she was on top of the kitchen cabinets shaking in fear, such as I have never seen before.  Over time, he taught her to trust again. In time, she sat behind his head on the couch, and then next to him on the couch. Eventually, she even let him bet her tummy! And likewise, she became his therapy animal, calming his panic attacks and giving him a reason to get up in the morning when there didn't seem to be any other reasons. They did wonders for each other.

Recently, there was an accident in which Sketch was badly injured. At about 5:30am, the Torrington Police took her to the Veterinary Emergency (24-hour) Center in Canton (CT), because her dad doesn't have car. After keeping her compfortable and doing a cursory check, the clinic determined her injuries were so severe that only a massive amount of money could begin to heal her and even there there was no assurance she would live, after possibly months of pain. Her daddy did the humane thing, sending her to the Rainbow Bridge. And in doing so, he lost much of his own heart.

I spoke with the clinic several times and have all the detail from them (you may call them and while they cannot give any details, they can confirm this history of Sketch).  Her total vet bill of $385, and of that $100 was generously donated by 'For the Love of Jack' (a wonderful organization who in the past has helped me with taking care of a huge number of abandoned house cats). WIth THIS fund, I hope (1) to raise money to pay the bill, because Sketch's dad cannot, (2) to get her ashes. UPDATE:  We originally wanted to reaise the $100 to reimburse For the Love of Jack so they can continue their good work but a very generous person has donated that for us. Thank you so much for that!!!

So here is the updated breakdown:

$485 Total. Anything we can raise over this amount will go to him to reimburse him for about $50 in gas he had to pay because his only vehicle to the clinic was a horrible old dump druck which got about 2 miles/gal and used up the last of his money. Anything beyond $535 will also go to 'For the Love of Jack'. I will cover the Fundrazr fee as well as other donations to him which I have already made. Someone else is going to pay for a clay pawprint.

Thank you to everyone who can help!!

Sarah Melcher is managing the funds for this campaign. The campaign is for a personal cause.