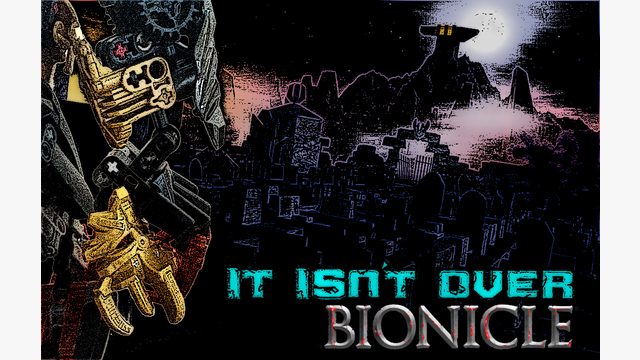 Thanks for stopping by! My name is Joseph, and I am an aspiring visual artist and storyteller. Among my greatest inspirations in both these areas has been LEGO's Bionicle theme, which ran originally from 2001 to 2010. Naturally, I was thrilled when a reboot was announced for 2015--as were several of my siblings. Unfortunately, despite early announcements that Bionicle G2 would last at least three years, it was abruptly and uncerimoniously cancelled in July of 2016, with a rushed ending that left many fans unsatisfied and mountains of potential unrealized.

In light of this, my siblings and I are planning to create a proper conclusion to the theme. We have solid goals in two areas:

~First, we will be writing a novel-length story continuation (which currently has the working title Bionicle: Ultimate Power), to be made available for free on several fan-sites, such as BZPower and Eurobricks.

~Second, we will design and test-build a minimum of twelve LEGO models in the established style of Bionicle G2 sets, and publish instructions alongside the story to allow fans to build their own.

To clarify, as this seems to have been a point of confusion, I will not be selling anything. The story and instructions will be made available for free, and this fundraser simply aspires to cover the cost of parts, paints, etc.

This is the extent of what we have planned currently, but my team and I would be more than willing to produce more in both areas if we get enough excess funds! For now, though, such thoughts are just speculation, and we are focusing on our primary goal of giving the second generation of Bionicle the epic conclusion it deserves.

NB: This is a fan project and is not endorsed or supported in any way by the LEGO Group, which, of course, is the copyright holder of Bionicle and all associated characters.

Joseph Stone is managing the funds for this campaign. The campaign is for a personal cause.