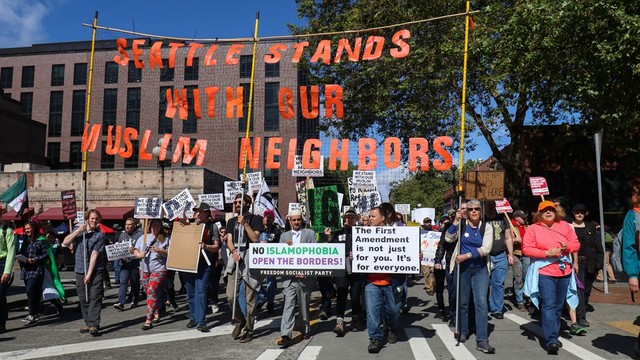 On June 10th, 2017 anti-Muslim hate group ACT for America staged a series of "anti-Sharia law" protests all across the United States. Here in Seattle, the General Defense Committee partnered with a broad spectrum of revolutionary organizations, clergy, and non-profits to mobilize a community response to make it clear that Seattle stands with our Muslim neighbors and their hateful ideology has no place here.


Despite having designated police liaisons who met with Seattle PD's commanding officer prior to the action beginning where the goal of keeping our action peaceful and separated from the anti-Muslim action was made clear, SPD allowed a group of around 15 individuals to repeatedly enter the counter demonstration and attack participants. The counter demonstration, after having successfully drowned out the bigots with a noise brigade, marched away from the location to disperse themselves. At this point, SPD once again allowed the same group of individuals from the Proud Boys and Patriot Prayer to stalk the counter demonstration from City Hall to Pioneer Square where they once more violently attacked people.

It was at this point that 3 counter demonstrators were brutalized and arrested by Seattle PD. Less than an hour later, a 4th person was arrested while defending themselves from an attacker who had been in attendance at the ACT for America rally. Organizations and individuals who were part of the mass mobilization against ACT for America on the 10th later released an open letter calling for accountability for SPD's actions on that day but it was to no avail.

The Anti-Repression Committee of the Greater Seattle General Defense Committee Local 24 is raising funds to support the 4 people who were arrested. All funds raised will go directly to those arrested that day to help cover legal expenses and other economic burdens they are facing as a result of the legal issues, with any additional funds raised going to Puget Sound Prisoner Support which is a local autonomous organization which does fantastic work to support and free people facing legal repression. 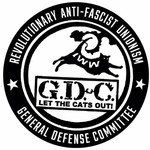