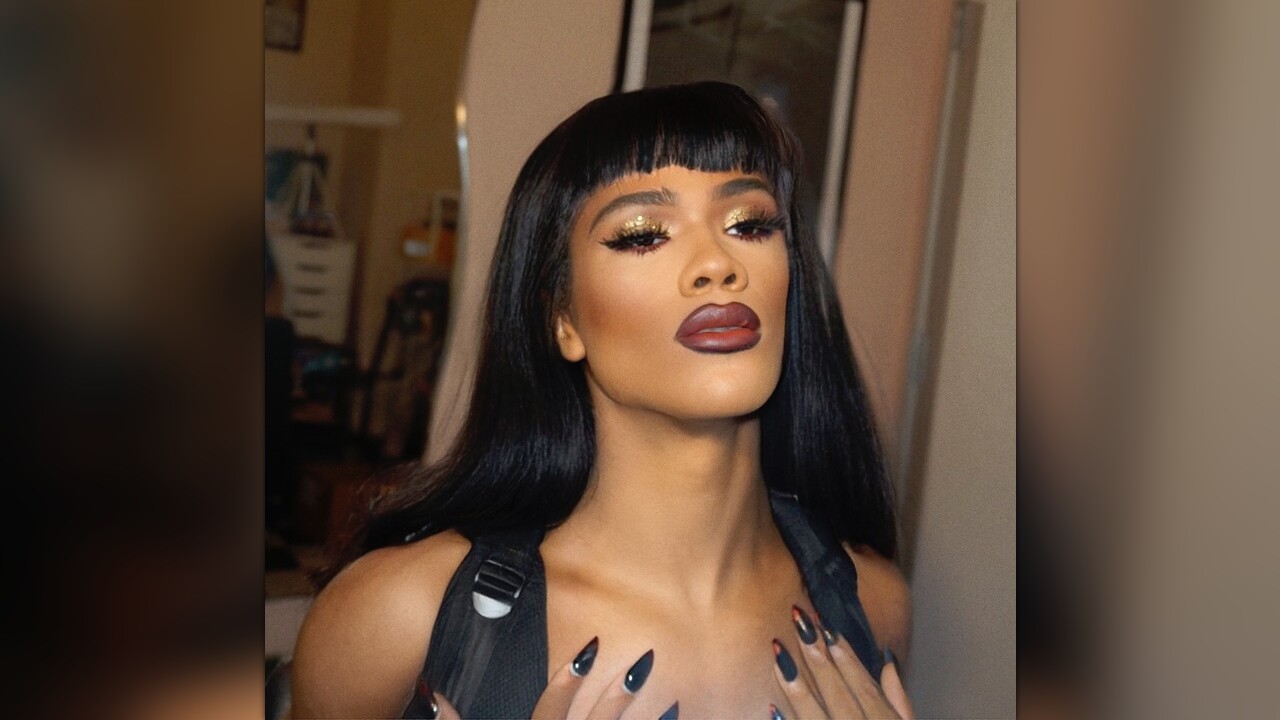 REMAINING SURGERIES ON HOLD DUE TO LACK OF SUPPORT : I have worked every single day for the past two years without taking a break. And even through my first surgery which was very brutal, I had to work everyday fundraising to raise the money I needed to support myself being stuck in my apartment unable to do anything for a month and a half. I still have a few major surgeries on my list like my top surgery, hip augmentation, and bottom surgery. All of these will take a while to recover from as well. I need to reach my full goal in order to support myself through these procedures and help me as I’m working towards independence. Please help me reach my full goal by donating and sharing my campaign as much as you can across all your platforms. Gender dysphoria is creating a lot of confusion within me and I would love to be able to safely take these steps to become my fullest self. Your support really matters. 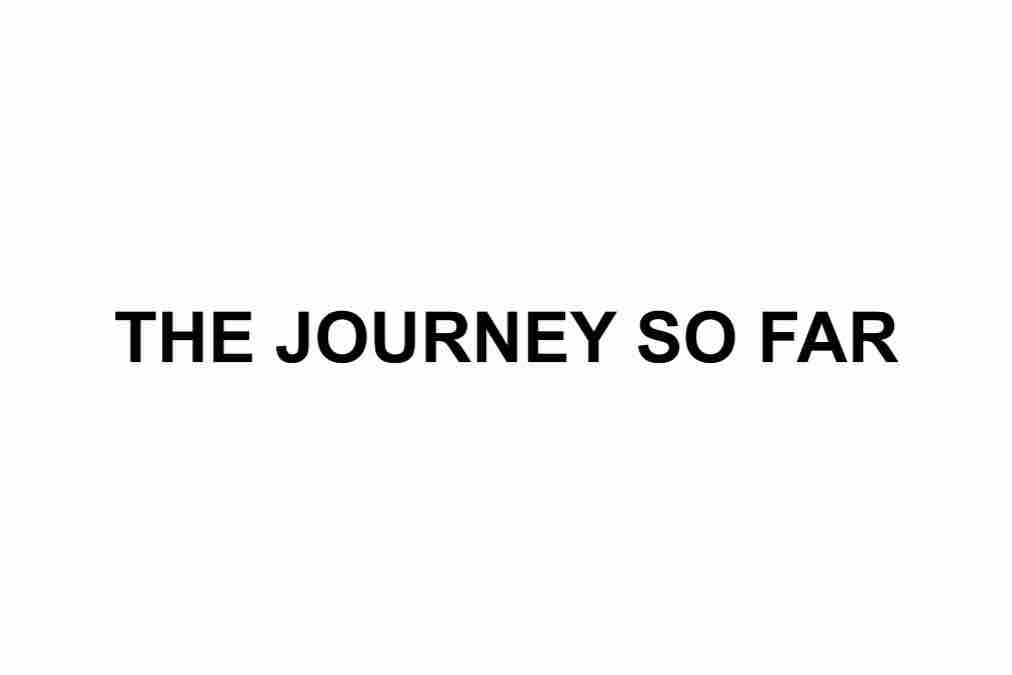 Deborah is a 22 year old transgender woman working as an artist on a music project featuring some of the top producers in Los Angeles, California.  Before pursuing her own endeavors, she worked behind the scenes for new age experimental art spaces such as "Artechouse" in Wahington D.C., and artists such as Taylor Swift, Jay Z, and Beyoncé. She is also credited as a footage contributor for organizations such as the University of British Columbia, Viceland, NBC4, and MAPS. 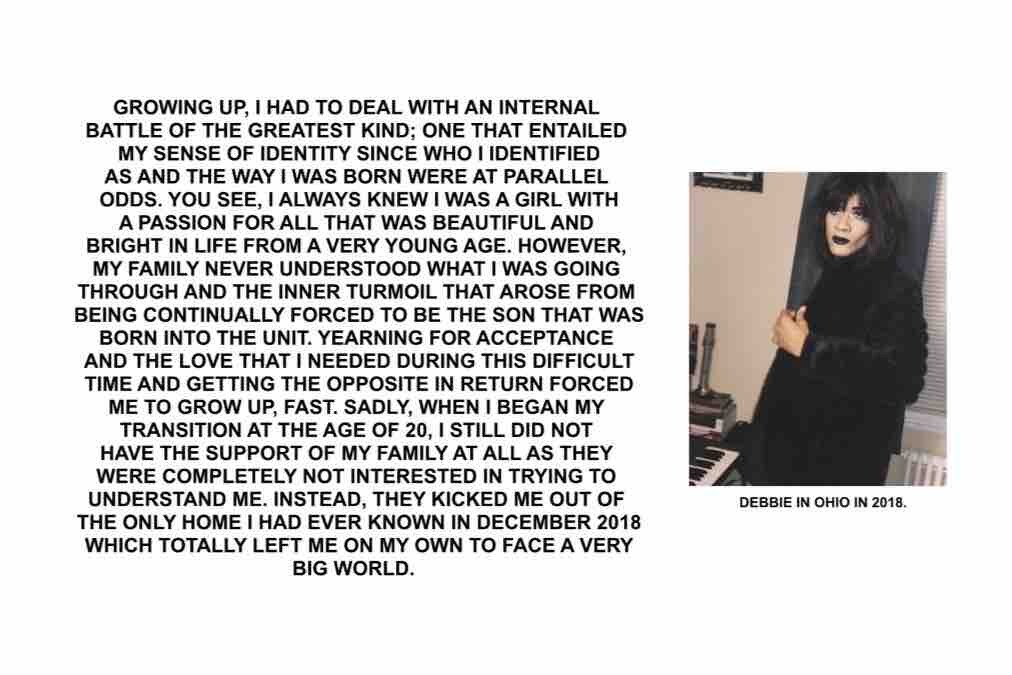 Growing up, I had to deal with an internal battle of the greatest kind; one that entailed my sense of identity since who I identified as and the way I was born were at parallel odds. You see, I always knew I was a girl with a passion for all that was beautiful and bright in life from a very young age. However, my family never understood what I was going through and the inner turmoil that arose from being continually forced to be the son that was born into the unit. Yearning for acceptance and the love that I needed during this difficult time and getting the opposite in return forced me to grow up, fast. Sadly, when I began my transition at the age of 20, I still did not have the support of my family at all as they were completely not interested in trying to understand me. Instead, they kicked me out of the only home I had ever known in December 2019 which totally left me on my own to face a very big world. A physical altercation ensued between myself and another family member who attempted to use a weapon against me. I had to defend myself and I panicked and entered fight or flight mode. I was then arrested and kept overnight in a jail in Upper Marlboro. I was told my family member was pressing charges against me as well as my own Mother getting a protective order against me. I battled in court for nearly 2 years and was denied many jobs after hundreds of applications and interviews that lead nowhere due to what was on my record during background checks. 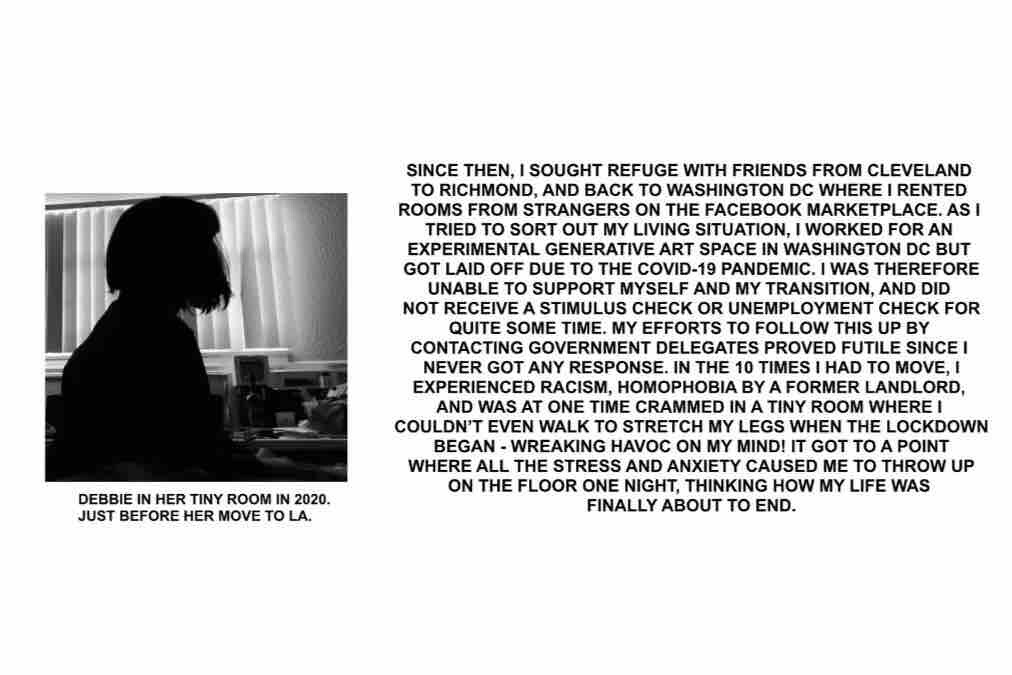 Since then, I sought refuge with friends from Cleveland to Richmond, and back to Washington DC where I rented rooms from strangers on the Facebook marketplace. As I tried to sort out my living situation, I got lucky and worked for an experimental generative art space in Washington DC but got laid off due to the Covid-19 pandemic. I was therefore unable to support myself and my transition, and did not receive a stimulus check or unemployment check for quite some time. My efforts to follow this up by contacting government delegates proved futile since I never got any response. In the 10 times I had to move, I experienced racism, homophobia by former landlords, and was at one time crammed in a tiny room where I couldn’t even walk to stretch my legs when the lockdown began - wreaking havoc on my mind! It got to a point where all the stress and anxiety caused me to throw up on the floor one night, thinking how my life was finally about to end. 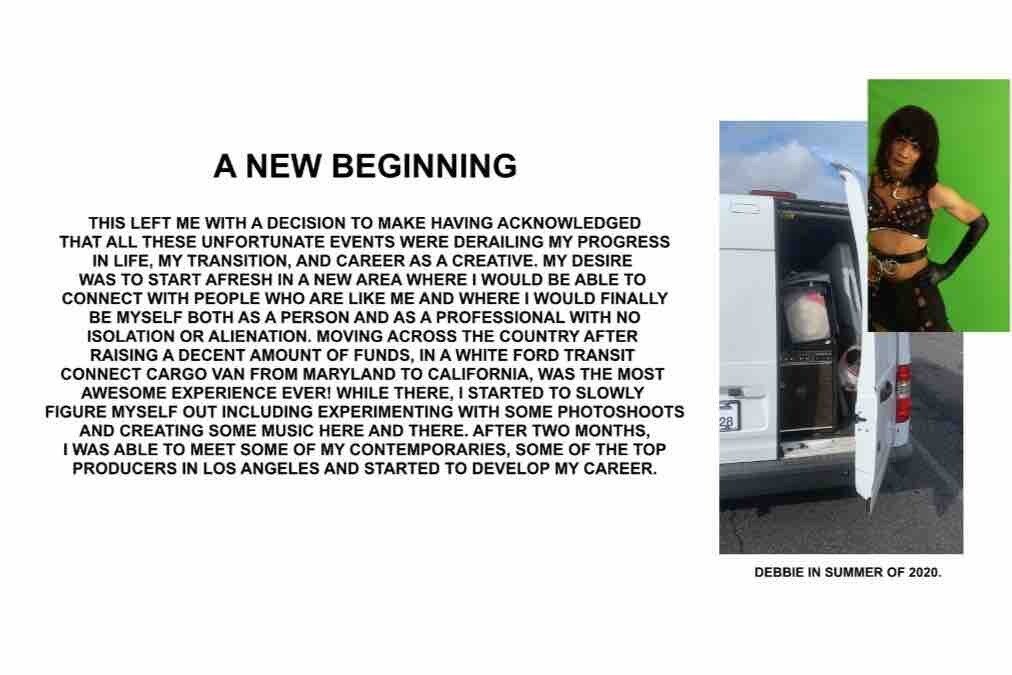 This left me with a decision to make having acknowledged that all these unfortunate events were derailing my progress in life, my transition, and career as a creative. My desire was to start afresh in a new area where I would be able to connect with people who are like me and where I would finally be myself both as a person and as a professional with no isolation or alienation. Moving across the country after raising a decent amount of funds, in a white Ford transit connect cargo van from Maryland to California, was the most awesome experience ever! While there, I started to slowly figure myself out including experimenting with some photo shoots and creating some music here and there. After two months here, I was able to meet some of the top producers in Los Angeles who helped me to develop my career. 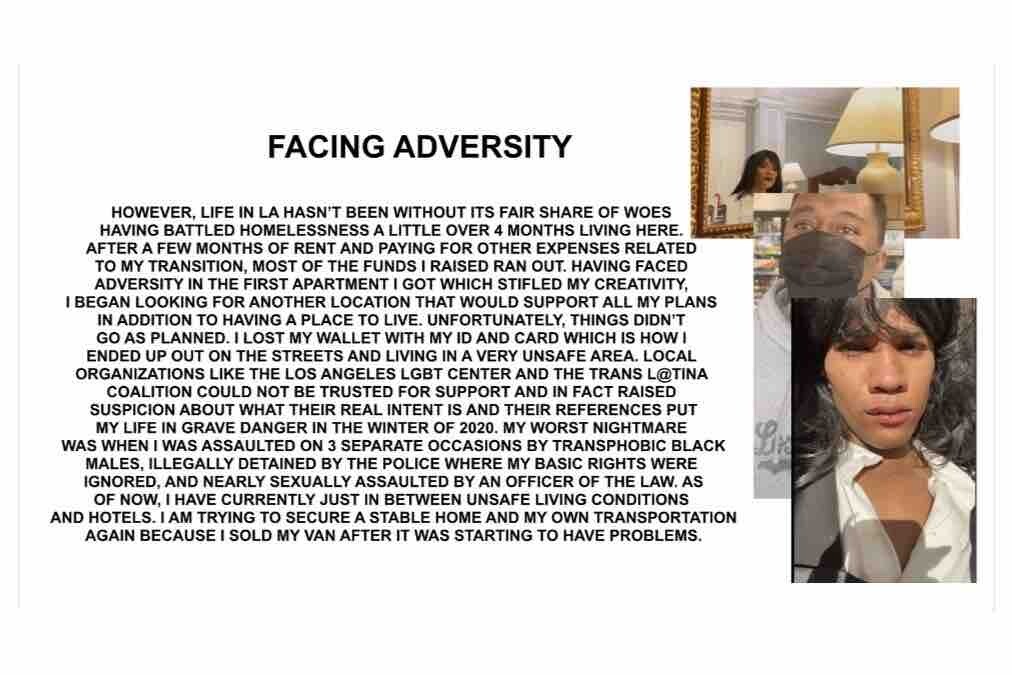 However, my life in LA hasn’t been without its fair share of woes having battled homelessness for a little over 4 months in living here  as most of the funds I raised ran out. Having faced adversity in the first apartment I got which stifled my creativity, I began looking for another location that would support all my plans in addition to having a place to live. Unfortunately, things didn’t go as planned. I lost my wallet with my ID and debit card which is how I ended up out on the streets and living in a very unsafe area. Local organizations like the Los Angeles LGBT Center and the Trans L@tina Coalition could not be trusted and their references for shelter put my life in grave danger. My worst nightmare was when I was assaulted on three separate occasions by a transphobic black males. After the third encounter, I was illegally detained by the police where my basic rights were ignored, I was nearly sexually assaulted by an officer of the law, and I spent over 2 days in-between jails across Los Angeles. That was a very traumatic experience. As of now, I am currently just in between hotels. I am trying to secure a stable home and my own transportation again because I sold my van due to the issues I was having with it. 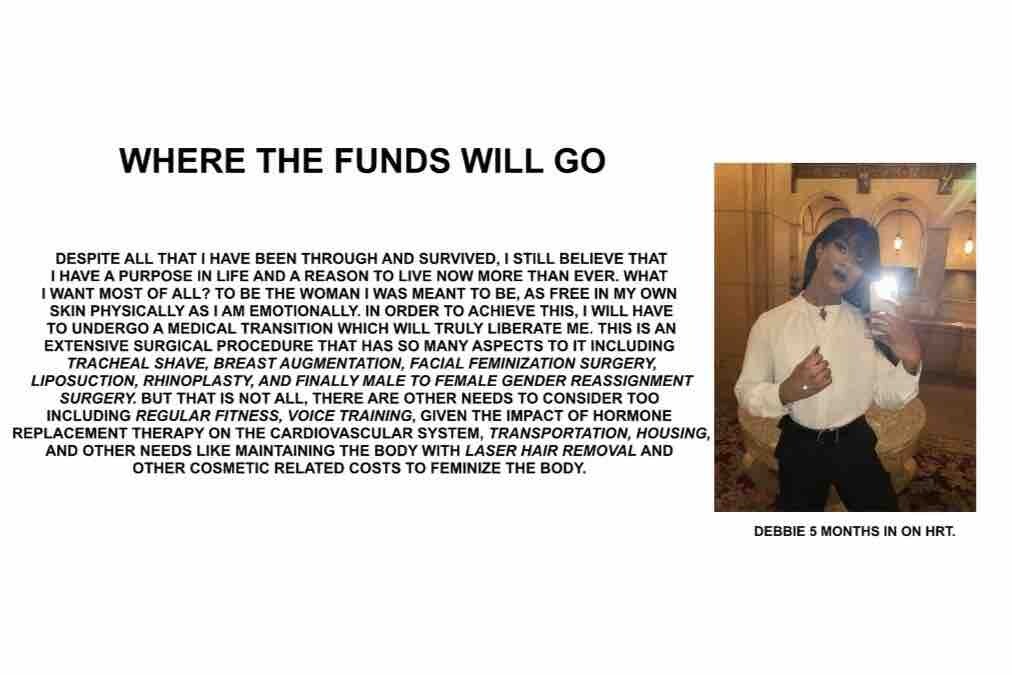 This is where you come in and Why your support matters:

Despite all that I have been through and survived, I still believe that I have a purpose in life and a reason to live now more than ever. What I want most of all? To be the woman I was meant to be, as free in my own skin physically as I am emotionally. In order to achieve this, I will have to undergo a medical transition which will truly liberate me. This is an extensive surgical procedure that has so many aspects to it including  tracheal shave, breast augmentation, facial feminization surgery, liposuction, rhinoplasty, and finally male to female gender reassignment surgery.  But that is not all, there are the after-care needs to consider too including  regular fitness and voice training  given the impact of hormone replacement therapy on the cardiovascular system, transportation, housing, and other needs like maintaining the body with laser hair removal and other beauty costs. 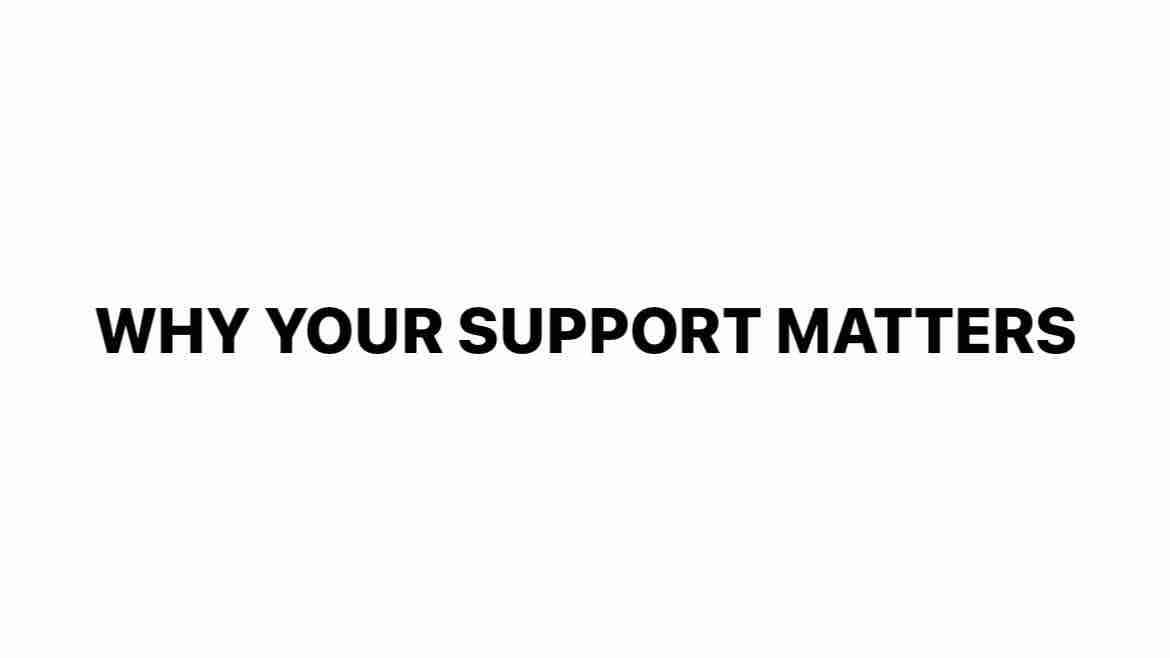 I still need more financial help to finally realize my lifelong dream of feminizing my body especially due to how hard life became for me a few months after being here battling housing instability, lack of traction, attacks from others including transgender people online, being illegally detained by LAPD, being targeted by my family members, and attacks by several transphobic men. These instances of derailed already extremely slow progress with this crowdfund.  Please support me in this journey to reaffirming my identity and finally being comfortable in my own skin. Your support matters because transgender people are often the targets of violent hate crimes and discrimination in society which makes it harder to find stability, work, or safe living conditions. Many organizations that claim to be there for LGBTQ+ do the bare minimum to actually help the community. Your direct action helps to support transgender leaders braving an ever-changing world landscape. You can also help spread word of my campaign by sharing the link with others and supporting my online art store.

Debbie Crankin is managing the funds for this campaign. The campaign is for a personal cause.