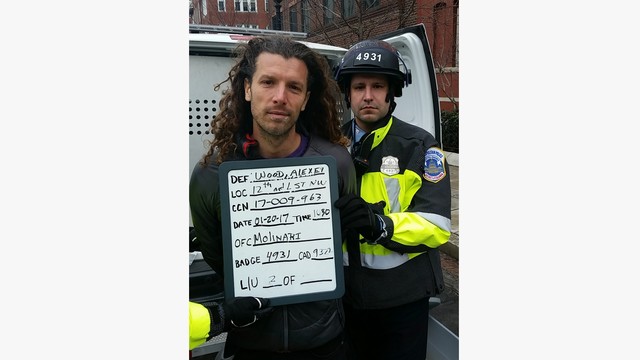 As Donald Trump was being sworn into office, Alexei Wood was in a stuffy patty wagon. Just earlier, he was documenting a DC protest moments before Trump took his oath to uphold the Constitution. Police surrounded and mass arrested over 230 people, including Alexei. The police and courts have charged all the defendants with at least 8 felonies.

Alexei has a long history of documenting social justice issues and resistance movements. He filmed and live-streamed the demonstration from beginning to pepper-sprayed end. He live-streamed in detention of the police kettle and even his own arrest. The video is available for anyone curious to get a first-hand experience and decide for themselves whether people should face 75 years in prison for protesting.

Alexei has to travel to DC for status hearings several times before his trial on November 20th, 2017. The trial is expected to last about two weeks. His camera gear was confiscated and will not be returned until all the trials are finished late 2018. This arrest and court case has taken a toll on Alexei, mentally, emotionally, physically, and financially. Let's pitch in and help relieve some of his stress. He is also asking for airline miles people might have to spare.

Visit LexShoots.com/J20Arrest for more information, including links to his live-stream and photojournalism portfolios.

Alexei thanks you in advance!

Alexei Wood is managing the funds for this campaign. The campaign is for a personal cause.