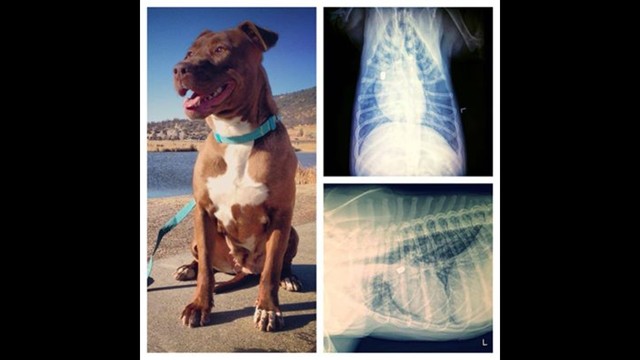 SHADOW AND CLANCY'S STRUGGLE FOR LIFE: I think that its important for all of you--certainly those that are generous enough to donate to save Shadow--understand how they came to us, why they are still alive and what their story signifies. HERE GOES: I got a message from Ashley, an Animal Control Officer, that stirred me to my bones. She said that some hikers had found and directed her to a one-dog crate with three dogs in it. To say that this crate was off the beaten path is an understatement--they were left in the middle of nowhere, the only connection to human beings being the tire tracks and bullet casings near their crate. In the crate were 3 dogs: 2 dogs we've grown to know and love as Clancy and Shadow, and the other a deceased sibling that was frozen solid. Temps had reached 15 degrees that night and it wasn't clear whether the cause of death was gunshot wound, hypothermia or other abuse. Furthermore, the dogs were most likely out there for days, in the elements, with no shade. Clancy and Shadow were transferred to Lake Isabella Animal Shelter where I picked them up a day later (the staff there was great to these dogs and to us). When I met them, they were not dogs, but rather shivering, petrified souls that had had the life sucked out of them. The only thing that they knew was fear--fear of the kennel workers, fear of me, fear of everything. When dogs are afraid, they can be aggressive and Shadow was no exception. I was able to tame them after a series of walks-- Cesar Millan inspired, confident trudges where the dogs learn to feed off of my confidence and grasp the idea that I am in charge, no pain will come to them and its all going to be ok, just trust! We loaded up in Motor City Buick GMC Mutt Mobile and made for SJVH to have them examined and tests ran. They had some serious injuries but after X-rays were done on Clancy it was assumed that Shadow had no GSW's either and that the wounds were inflicted by other dogs, or each other when they were kenneled. I've only just learned about why the oversight happened and we'll be sure to make a very serious note with our vet and be as hyper-vigilant as possible from now on. Despite shell casings being found around the crate, you just don't expect that humans would load up large dogs into a small crate and open fire. After some fluids, medication and a few days at the hospital, both dogs came home. Clancy went to his foster up the street and Shadow came to my place because she was aggressive and needed some rehabilitation. We rehabilitated one another. She ran with me, learned to be well with the other dogs--even love them-- and I may have let her sleep in my bed a few times... After a couple months of being my Shadow, our girl was adopted to my new pal Robbie and his Mom. This is an unlikely pairing because Robbie was recently released from prison after 12 years of incarceration. Even more interesting is that are the same age and from the same town. I immediately bonded with Robbie and had the most faithful and stoic understanding come over me: that Robbie was meant for Shadow and she for him and that they would help each other transition into this crazy World. I'm not sure I've ever felt as comfortable about an adoption, but Shadow was going to get her second chance and she was going to do it with her new Dad who was in the midst of his. On Friday morning Shadow began to cough up blood. Robbie called me and I could hear it in his voice when he said "Bro, she's coughing up blood, I don't know what to do." I didn't really know what to do either but send her to the hospital for x-rays and blood work. The x-rays very obviously revealed what we had feared in the beginning: that Shadow had been shot and had a bullet lodged in her lung region. When Saturday morning came and the condition had worsened, WE ALL SHOT INTO ACTION! Holly and Rick volunteered to fly Shadow as close to LA as possible and I made as many phone calls as I could. I spoke with Eldad Hagar - Extended Profile. in Israel (what a greacious man), Jillian Dunn from Cesar Millan Foundation, Mrs and Dr. Grossman, Amanda from Panda Paws Rescue, and the list goes on. Everybody wanted to help and its all worked out so far. We located a surgeon and a hospital that is well prepared to deal with such a surgery, albeit incredibly expensive, and we started receiving pledges. I was enroute to Baks from down South, so made a you turn after the Grapevine and headed the 1:45 to Agua Dulce Airport. I met Holy, Rick and Shadow on the tarmac, swapped our burned doggy Chance for Shadow and hit the road at near the speed limit. Less than 45 minutes later, I was at VCA West Los Angeles ready for our girl to be seen by leading specialist, well qualified to help save her life. The imaging, professional round the clock care and surgery will most likely cost north of 10K and we need your help. As it stands now, Robbie and his Mom are down south with Shadow. She is having surgery this morning and I know that she will be OK. Please help me pool our collective positive energy and direct it towards Shadow by sharing this post. *Share this post until 60 minutes, CNN, Fox News or somebody finally decides to look this way and help tell the story of Kern County's Lost, Abandoned and Abused Animals. -- Zach M. Skow Marley's Mutts Dog Rescue 661-821-1327 www.marleysmutts.com www.facebook.com/marleysmuttsdogrescue https://twitter.com/ZachSkow

Marleys Mutts is managing the funds for this campaign. The campaign is for a personal cause.