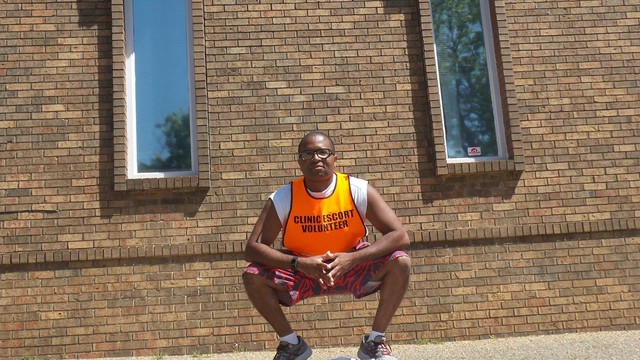 Travis Jackson has been a volunteer clinic escort at the POWER House in Montgomery, AL since July 2015.  Not only is he a defender of women's rights, he volunteers his time (and money) supporting the local LGBTQ+ community, voting rights, veteran's rights (Travis served in the US Army and is an Iraqi War Veteran), and Black Lives Matter in Alabama.

On May 18, 2018, while walking a patient to the clinic on the public sidewalk, a violent anti choice protester grabbed the umbrella that Travis was using to shield the patient from abuse and destroyed it.  Because the umbrella he was carrying belongs to the POWER House, a warrant was signed by Mia Raven, co-founder of the POWER House, against the protester for destruction of property.

On May 25, 2018, Travis was arrested for "harassment" by the protester who destroyed the umbrella.  We at the POWER House believe this was a retaliatory action by the protester for the destruction of property charge.  We also believe that since Travis is one of our escorts of color who fights tirelessly for civil rights, this also made him a target for the anti-choice protesters who are also - surprise! - racist.

It is absolutely preposterous that ANY protester could claim harassment against a clinic escort.  Clinic escorts are NOT protesters, and serve as shields for the yelling, screaming, stalking and yes, HARASSMENT that patients must endure when accessing the healthcare that they need by anti-choice protesters.

All money raised through this fundraiser will go to legal defense for Travis, including an attorney and any court costs or fees incurred.  We want to ensure that NOT ONE PENNY will have to be paid by Travis for this unjust and vindictive arrest.

Clinic escorts are heroes who do not get paid (unlike our protesters) and endure a TON of abuse in order to help women get the care that they need.  On behalf of all the volunteer clinic escorts at POWER House, and the patients we serve, we thank you for your support of Travis.

Mia Raven is managing the funds for this campaign. The campaign is for a personal cause.