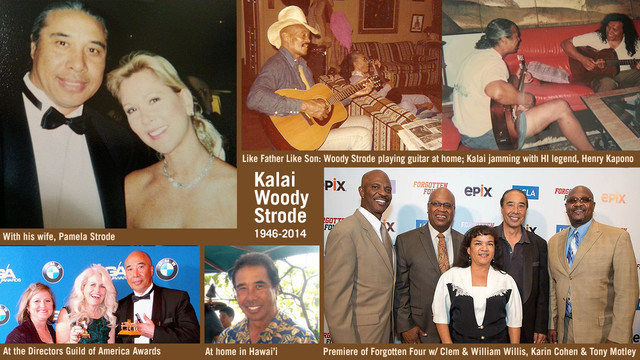 Kalai (Woody) Strode passed away suddenly over Thanksgiving while helping care for his mother-in-law. This is a fundraiser by his family and friends to pay for a simple but dignified burial for a man whose care and generosity touched thousands of people from California to Hawai'i and North Dakota.

All donations will go toward the burial/memorial costs. Funeral details are being finalized. and we'll update this website with that information once it has been finalized.  Location and exact time TBD.

Kalai Strode was born on December 16, 1946 in Hollywood, California to his mother, Princess Luukialuana Kalaeloa (Luana), and his father, Woodrow Wilson Woolwine (Woody) Strode. The year Kalai was born his father broke the color barrier in the National Football League when he played for the Los Angeles Rams alongside fellow UCLA great, Kenny Washington.

Kalai Strode grew up in East Los Angeles and graduated from James A. Garfield High School. He attended UCLA from 1965 to 1969 and graduated with a BA in Asian Languages. He spent his junior year in Mitaka, Japan at the International Christian University where he studied Japanese and Haiku. Kalai won a grant from the East West Center at the University of Hawai’i and graduated with a Masters Degree in Asian Studies in 1971. He spent part of 1970 as a guide for the American Pavilion at EXPO 70 in Osaka, Japan, and did post-graduate research in Kyoto the following year.

He began training as an Assistant Director on Roots in 1977 and became a member of the Directors Guild of America a year later. He served as Assistant Director on TV series such as: Lou Grant, The White Shadow, Diagnosis Murder and Lost; and for films such as North Dallas Forty and The Lost Boys. He acted in Hawaii Five-O.

For 13 years Kalai Strode lived in Honolulu, HI where he lived with his wife, Pamela. During that time he worked on a screenplay for a film about his father, who not only integrated pro sports but was a pioneer for African-American actors in Hollywood. Woody Strode acted alongside Kirk Douglas in Spartacus and Burt Lancaster in The Professionals. He also played the title role in Sergeant Rutledge at a time when there were almost no lead roles for black actors in American film.

Kalai Strode was featured in the recent EPIX documentary Forgotten Four in which he talked about his father’s role in integrating pro football. He is survived by his wife, Pamela Larson Strode aka Dakota Larson (member of SAG/AFTRA Guild), his son, Joshua Strode, and his sister, June Robertson. He is also survived by two stepchildren, Garrett and Nathan Nordstrom, and two step-grandchildren, Zevi and Sadira Nordstrom.

The family asks that, in lieu of flowers, financial contributions be made to the Kalai Strode Memorial Fund on this website. All donations will be for the final resting place of Kalai Woody Strode, a talented, kind, loving and spiritual man.

Gretchen Atwood is managing the funds for this campaign. The campaign is for a personal cause.