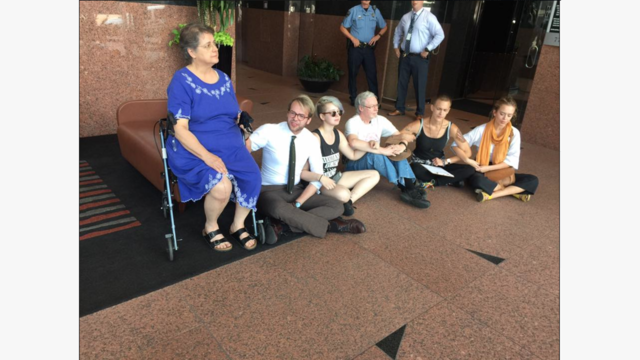 Today we had 7 individuals risking arrest in Roy Blunt's Clayton Office Building. They entered the building with a letter that they intended on delivering to Sen. Blunt himself, his office staff would not open their door and they retreated to the lobby where they decided they would wait to deliver Senator Blunt their letter.

We come here today as Missourians and constituents to save lives. The Better Care Reconciliation Act of 2017 would take away health insurance from 22 million people and gut Medicaid by almost $800 billion, resulting in hundreds of thousands of deaths, just to give a massive tax break to the wealthy.

We are here to demand that Senator Roy Blunt vote against the passage of this barbaric policy and any policy that cuts Medicaid, allows insurance companies to discriminate against people with preexisting conditions, or increases the total number of people without insurance.

We will remain here in the Senator’s office until we have personally served him this letter and witnessed him sign this pledge—along with hundreds more across the country who are sitting in their Senators’ offices for the same reason—because we insist that healthcare is right , not a privilege. The American people deserve a Medicare-for-All, single-payer system.

I, Roy Blunt, do hereby certify that I will vote against the passage of the American Health Care Act of 2017 and any other health care bill that would cut Medicaid.

The Clayton cops arrested all the those waiting for Senator Blunt AND the livestreamer.

We need to raise money to make sure these folks are taken care of and out of jail quickly. We thank them for putting their bodies on the line for ours.

We have to keep fighting and fight hard. Stop TrumpCare.

Activity highlights See all94
NEW Thank you emails can now be sent directly from the Transactions page.
Alternatively you can still leave a comment here.

Keith Rose hasn't posted any updates yet.
Newest | Oldest
Show more
NEW Thank you emails can now be sent directly from the Transactions page.
Alternatively you can still leave a comment here.

Keith Rose is managing the funds for this campaign. The campaign is for a personal cause.