Help us fly Miss Daisy to her forever home
Contribute
Campaign extended! Our deadline has passed but you can still help. ✕ 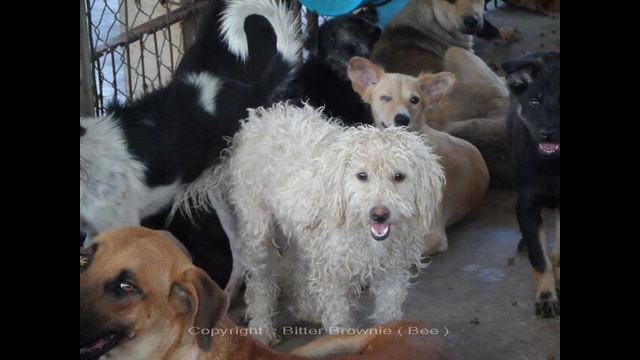 £450 raised 56% of £800 goal
20 contributors
4 Years running
Contribute
By Mark Osborne
Are you friends?
Personal campaign Keep it all
Oxford, GB

My name is Mark Osborne and in May of 2013 I noticed this little ball of cotton wool standing within a group of other rescued dogs.

From August that year I fostered her and have worked so hard to find a forever home, but nothing ever seemed to arise and nobody showed much interest.

So now a forever home awaits and we need to help fly Miss Daisy to the UK to live forever in peace and harmoney with her new family.

Daisy May - former NP-813 - is a DMT rescued by  Witchuda Pothaworn (Bee to many of us) and was saved from such a horrific fate. Her truck was stopped in April 2013 and she admitted to a huge mass shelter. Her chances to survive had been very little as she suffered from distemper.. The mass shelter was overcrowed at tha time due to 1000 dogs rescued hat been taken to the shelter in only 1 week. In addition many dogs had been on site already. Distemper spread fast and no way to isolate or treat the so many dogs.

Daisy May was lucky to find a dear sponsor Mark Osborne and Elisabeth Franziska Feigl the wonderful rescuer at Elfesworld Thailand. Elfe to become her foster. She could be pulled on May 6th and was taken to the clinic in BKK where she needed to stay for a few months and finally moved in with Elfe on 19th August 2013.

She is a super cute and lovely girl.

Now almost three years down the line she has found a forever home with a wonderful and caring lady and her family Sally Symonds.

Many great animal friends came together to help including Ulla A. Elsenheimer, Kathryn Raby, Karene Nethery-West, Britta Hwass-Neyrat and of course her new mum Sally Symonds.

Hopefully we can raise about 800 euro's to contrubute towards Daisy May's transport costs.

This sweet girl deserves a forever home like many of the stray dogs in this world and it would be Daisy's dream come true to finally find her very own mum and family.

Every single penny counts and will be very much appreciated which   Rescued to the UK with Love will be the benificiery. Mark Osborne hasn't posted any updates yet.
Newest | Oldest
Show more
NEW Thank you emails can now be sent directly from the Transactions page.
Alternatively you can still leave a comment here.

Mark Osborne is managing the funds for this campaign. The campaign is for a personal cause.