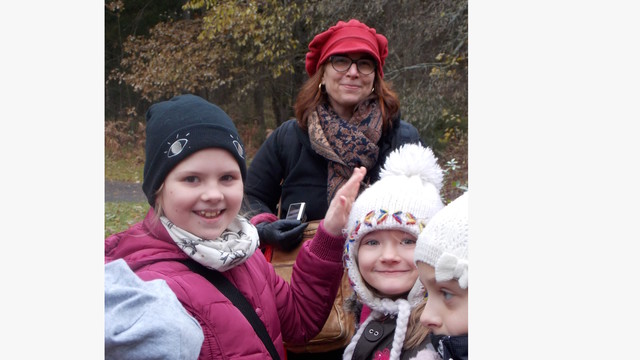 Hello, I'm Amara Graps, the Chair of the Local Organizing Committee of the 2017 European Planetary Science Congress (EPSC), which will be in Riga, Latvia in 2017. This conference is the second largest planetary science in the world, which will be the first time in central and eastern Europe. As of May 22, the EPSC 2017 Riga has a historic 1,000 submitted abstracts, making this meeting the largest scientific conference in the Baltics.

The photo shows some of the kids who would be interested to attend the Solar System for Kids Exhibit, at the EPSC 2017 Riga.

I invited the large planetary conference to this region because I believe that such exposure to the world's best planetary and space mission results will jump-start the Space activities in the Baltic region and help the workers enter the Space Industry.

Moreover, the EPSC 2017 Riga will help the countries transition fully where there is still friction from post-Soviet confusions. We have the great space facilities, we have enthusiastic kids, we have smart young people who simply need more inspiration to go into STEM subjects. We have more political support for space work than before and we have deep cultural links to the movement of the Sun and Moon in our ancient oral literature.

What else does one need for our Baltic Planetary Event? Funds. The conference came with no funds for the Local Organizers. After 9 months of unfunded time on the EPSC 2017 Riga, I'm running on fumes. My wonderful colleagues and friends helped me in a March Fundrazr get from month 6 to month 9 of this "Epic" EPSC Riga journey.

I need financial help quickly to finish the remaining tasks for the Congress. I have two confirmed sponsors. One, the contribution is small and the contract isn't fixed yet. The second sponsor is providing a huge benefit to the conference to stream key talks, but the discussions are still continuing on their support for the Local Organizing. Unfortunately, on June 1 all of my living expenses bills are due, before the paperwork for the two entities will be ready. On July 1, I will go on to new and funded work, not working fully on the EPSC 2017 Riga any more. I need financial help for the first weeks of June.

Your financial support will help me go on and complete the EPSC 2017 Riga Local Organizing duties. The first duty is finishing the Baltic Space Facilities Booklet where we have it already 2/3 funded. The second is a bunch of small but critical tasks that need someone physically in Riga to coordinate. Before I provide details on those tasks, I'd like to show how far I've come for the Local Organizing of the EPSC 2017 Riga, since March 2016, when the I was informed that our Riga won the European city competition:

2) I've provided to Latvian Investment Agency, LIAA, the Latvian exhibit plan they are implementing, and am providing funding for 2/3 of the Baltic Space Facility booklet via a European Commission grant I wrote,

3) I've coordinated the first space inputs to Science Center: "Zinoo" for their Solar System for Kids exhibits, where hundreds of kids from Latvian classrooms will be visiting during the conference week.

4) Twenty-five Latvian and Estonian high school and university students are funded through my SpaceTEM project and will participate with their space projects at the EPSC 2017 Riga.

5) Eight additional young people from Estonia and Latvia (six I've found so far, seeking two more) will be working for Copernicus Gmbh (will be paid) on the ground floor during the conference week and exposed to the world's cutting edge space results.

7) I'm a EPSC session convener myself for the in-space resource utilization session and I've succeeded to have our session keynote speaker be from the Luxembourg Minstry of the Economy spaceresources.lu group.

8) I've also found solutions with the EPSC Board to make the EPSC affordable to the Baltic people : most can participate at 65 EUR a ticket.

9) I wrote supporting letters to the Latvian artists for their Space-Art exhibits funded through funding provided from the Centenary Cultural Ministry Group LV-100. They won, but with 1/3 only of the funding they asked.

11) I've succeeded to have confirmation of several of the Baltics' most famous politicians to give an opening or keynote talk.

12) I found and coordinated the Riga social event company with Copernicus to fix our great Baltic singing and dancing social event.

Note that this isn't just a science conference. The local Education and Business generated from this EPSC 2017 Riga:

* The *local* Baltic companies/institutes/people (including students) *funded* for activities directly related to the EPSC 2017 Riga are about 45 people.

* EPSC Tourism spending: 500,000 EUR to be spent by the 800+ participants themselves in Riga during the conference week on hotel and food.

At this late stage of the conference development, what are the EPSC Funds to Support the Local Organizing Committee?

1) The money offered the Local Organizing Committee by the Latvian and European Commission to support this meeting is 5K from the Ministry of Education and Science to Zinoo for the Kids' exhibit + 4K to me, from the European Commission Latvia representation, which will mostly to be paid in October after the meeting.

2) In my hand to support me in this 10 month fulltime effort is 700 euros from the local EC office and about 3K from my friends and colleagues in a previous FundRazr.

The Local Organizing effort is underfunded by 500% and truly an effort supported by our friends and colleagues and almost no one else in Policy.

Here is what remains: My funded 4 weeks time for:

-select the keynote talks and obtain speakers permisison for those talks that will be streamed and archived by LMT. This service will provide an invaluable planetary science education to the international community, not just students in Latvia,

- to write invitation letters to the international EPSC participants who need visas,

- to coordinate the partners for the 'Solar System for Kids' Exhibit and get the exhibits on track,

- to coordinate childcare support for the 4-6 babies whose parents are attending,

- to communicate with the other hotels beside the Radisson, because the Radisson will be *full* of our conference-goers, and it's not enough. (1,000 Abstracts = 800+ participants)

- to acquire the nonLatvian chapters and make the first pass of scientific editing on the Baltic Space Facilities booklet.  Two other people will continue with a second level editing and the graphics layout. And then it's ready to print! The 'Live' electronic version will have a CC license for updating for the long future to market our Baltic Space Facilities.

You see? We are in the final stretch in preparation for this conference.

As for the Baltic Space Facilities Booklet to be distributed at the conference:

These are the Nine Baltic Space Institutes we are promoting to the EPSC 2017 Riga participants. They have a space competency together that rival other European regions. Here I introduce the space facilities in six minutes:
https://youtu.be/9LvUQgTznlo

And this is the Baltic Space Facilities Booklet Content

The only person who has no funds for their task on the booklet is me, Amara Graps, and the main EPSC local organizer.

Help me finish the tasks so that our Baltic people young, and old can learn about cutting-edge space and build collaborations, and provide archived talks so that all of you can join the space race too.

Amara Graps is managing the funds for this campaign. The campaign is for a personal cause.