Thank you everybody. Our campaign is now over. ✕
Make a Balanced Budget Amendment a Reality!
✖
Gallery (4) 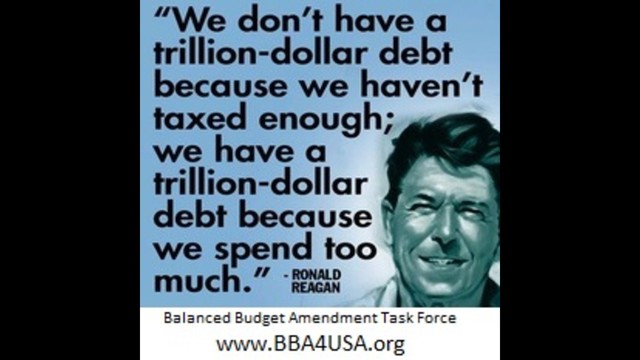 Our nation is over $17 trillion in debt and going deeper every year.  The national debt will cause a collapse of our national economy and place our system of government in jeopardy.

Chairman of the Joint Chiefs of Staff, Navy Admiral Mike Mullen stated, “I’ve said many times that I believe the single, biggest threat to our national security is our debt”.

Congress   has   placed   the   American   people   in   an unconscionable position of being responsible for a debt it did not have to create. Never before in the history of this country has one generation left the next generation in such a precarious fiscal situation.

The best solution to our nation’s profligate spending and debt is to make it unlawful for Congress to borrow money by way of a Balanced Budget Amendment to the Constitution.

Will you help make a Balanced Budget Amendment a reality?

Scott Rogers hasn't posted any updates yet.
Newest | Oldest
Show more
NEW Thank you emails can now be sent directly from the Transactions page.
Alternatively you can still leave a comment here.

Scott Rogers is managing the funds for this campaign. The campaign is for a personal cause.