Thank you everybody. Our campaign is now over. ✕
People Support Unist'ot'en Camp!
SubscribeUnsubscribe
✖
Gallery (6) 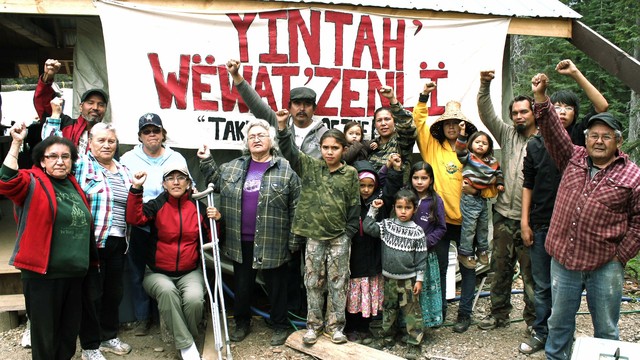 Since 2010 Unist'ot'en clan members have been maintaining a permanent presence on their traditional territory in so-called Northern British Columbia. The reason for doing so is to re-assert sovereignty over lands which were never ceded to the Canadian government and to begin a process of decolonization and return to the land. The Camp also stands as the enforcement of a clan decision to ban all of the proposed Fracked Gas and Tar Sands pipelines intending to cross over their territory.

Recently, the notorious fossil fuel giant Chevron has announced it intends to begin construction on its Pacific Trail Pipeline by June 15th of this year. At a recent open house in Prince George representatives from the company declared that if the community did not sign on to the pipeline it would be “tough luck for them” and that if the Unist'ot'en Camp did not stand aside they threatened to have the blockade removed by force.

To protect the land and water on their territory from an oil and gas spill, to protect the coast from a potential tanker accident and to protect all future generations from global warming the Unist’ot’en are recruiting allies and training people to use direct action to stop pipeline construction.

The proceeds from this campaign will be donated directly to the Unist'ot'en to support their efforts.

Brett Rhyno is managing the funds for this campaign. The campaign is for a personal cause.