No thanks
Sometimes Divorce Takes a Village
✖
Gallery (1) 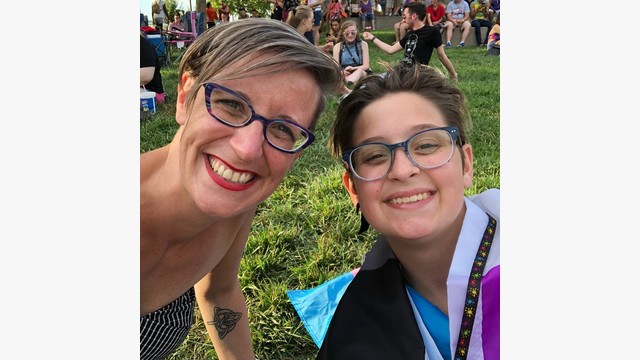 $695 raised 14% of $5k goal
13 contributors
99 Weeks running
Contribute
By Kate Herzel
Are you friends?
Personal campaign Keep it all
Columbus, OH, US

Imagine staying at home with your kids for their entire lives, for practically your entire life, nurturing them, homeschooling them, keeping the household humming along as peacefully as you possibly can. And then, one day, your partner decides that you are failing your children and tells a mandated reporter that your kids are far behind and your house is unclean, triggering a CPS call...a homeschooler's worst nightmare.

That was Caity's reality just a few months ago. Facing the thought that her kids, a 16yo who does best when not forced to interact in large groups, and a 14yo trans son who is just finding his way in the world, might suddenly be thrust into public school for the final few years of high school, Caity chose to leave her 17-year marriage in order to find some calm in the chaos.

Sometimes the hardest thing and the right thing are the same.

Caity left expecting to receive enough financial support to cover rent and knew she'd be able to figure out the rest. As a self-employed single mother, she was careful to make sure that she could guarantee a roof over their heads in her agreement with her ex-husband to file a petition for dissolution of marriage.

Her world got turned upside down when he demanded a standardized test-style academic assessment of the children with the goal of placing them in public school if they were behind grade level in any one area. Months later, she is facing costly lawyer's fees to fight for her right to continue homeschooling them in the precious few years they have left under her roof.

We are raising money for Caity's legal fees and are asking for your contribution. As a self-employed single mother, Caity faces an unfair financial burden that gives the opposing lawyer a lot of leverage to "negotiate"--basically, strong-arm her financially into agreeing to accept less than her children really need to thrive. Caity can either agree to their terms, or pay a lawyer thousands of dollars to file paperwork to fight it in court.

If you know Connor and John, Caity's kids, then you know two young men who are unconventionally brilliant, who can hold an intellectually stimulating conversation with just about anyone, and who are learning that they have a lot of power to change the world by thinking outside the box a little bit.


If you know any homeschool kids at all, you know that they are highly likely to succeed in anything they put their minds to, and also that they are highly unlikely to score well in a standardized test, as their entire schooling has been centered around fostering a lifelong love of learning rather than receiving high marks in test subjects.

Please help Caity fund her legal fees. Any contribution helps. Let's band together and show Caity that she and her kids matter, that they are worthy of our love and support, and that they're going to make it after all <3 Kate Herzel is managing the funds for this campaign. The campaign is for a personal cause.