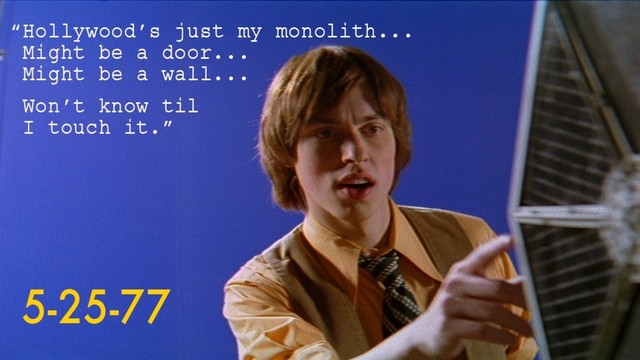 $919 raised 5% of $20k goal
27 contributors
7 Years running
Contribute
By Patrick Johnson
Are you friends?
Personal campaign Keep it all

Finally, after 9 years of giving everything I have to bringing 5-25-77 to the screen, the film is actually within reach of a serious distribution deal! The awareness generated by last summer's "Hearts of Dorkness" test-screening/roadshow tour, combined with the announcement of the new LucasFilm/Disney/JJ Abrams STAR WARS films, has done exactly what I hoped it would do. It has made 5-25-77 a title that's fresher NOW than when it was MADE. Because of the market's new excitement over the future of Star Wars, I have recently been approached by a number of potential distributors. All were tremendously excited by the value of a film about the first kid to ever see the original Star Wars-- As one put it-- "We'd actually seen the film a couple years ago and really liked it... But, at the time, we thought Star Wars was pretty much over". But one distributor, in particular, who I am not allowed to name yet, is both powerful enough and SMART enough to brilliantly market and release 5-25-77, both theatrically and on all other platforms. And rather than just talk about it, they have already rolled up their sleeves and started reviewing all of our cuts, deleted scenes, and raw material with an eye toward funding a cut of the film that would suit their needs as a studio and still make me, and the many people who love and support the film we have, very very happy.

This FundRazr campaign is about allowing me, for the next few months, to concentrate exclusively on guiding 5-25-77 the final distance it must go in order to finally find its place in theaters everywhere. I have carried this film on my back for nearly a decade... always knowing the time would come when the effort would be proven worthwhile. Along the way, so many people have given so much time, energy, love, and support of every kind. And they've done it because they can see that what we have in 5-25-77, when finally put before audiences, will be magic. But between that day and THIS one, I need to be able to do EVERYTHING I can to support the effort. Including not only the work of developing the final cut for the distributor, but also traveling to several major film festivals over the next few months, INCLUDING Montreal's FANTASIA festival in July-- which will provide an amazing opportunity to expose 5-25-77 to EXACTLY the sort of crowd that will show our future distribution partners just how well the film can be received! However, I have depleted all my personal resources getting us this far. So I'm asking one last time, for ANYTHING you can spare to get us across the finish line. With your help and the help of anyone you know who believes in this sort of thing... I believe with all my heart that over the next 2-3 months, I will be able prove all of us right.