Help the West Hollywood Swingers C get to COLUMBUS
Contribute
Campaign extended! Our deadline has passed but you can still help. ✕ 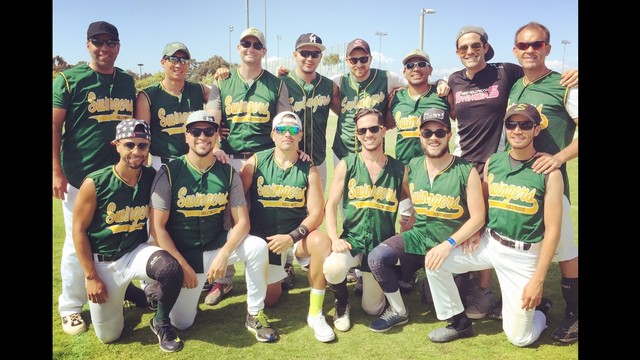 $2,650 raised 53% of $5k goal
52 contributors
4 Years running
Contribute
By Jordan McKirahan
Are you friends?
Personal campaign Keep it all
West Hollywood, CA, US

As a result, we were invited back by NAGAAA to participate in the 2015 WORLD SERIES, this year in a higher rated division.

For those of you that are unfamiliar, GLASA is the Los Angeles Gay and Lesbian Softball league. GLASA is part of a HUGE national organization called NAGAAA, The North American Gay Amateur Athletic Alliance. Over 30 cities across the country have their own softball leagues, each league consisting of many softball teams, with varying divisions based on players' skill sets. The best teams from all divisions and all leagues across the country win berths to go and represent their city in the NAGAAA World Series. It's a huge honor!

This year, the SWINGERS will be attending the 2015 World Series in COLUMBUS.

We are stoked, humbled, and ready to represent our great league and city in this year's World Series, but now, we need YOUR help again!

We will be fundraising all summer long to offset those costs. To kick off that fundraising effort, we are graciously asking for any and all monetary donations. EVERY bit counts. We have set a lofty goal, but are going to work hard to ensure that our whole team has the opportunity to participate in this incredible experience.

Our team deeply appreciates each contribution. We THANK YOU for your generosity & support. And we cannot wait to share in this important and special experience! Jordan McKirahan hasn't posted any updates yet.
Newest | Oldest
Show more
NEW Thank you emails can now be sent directly from the Transactions page.
Alternatively you can still leave a comment here.

Jordan McKirahan is managing the funds for this campaign. The campaign is for a personal cause.