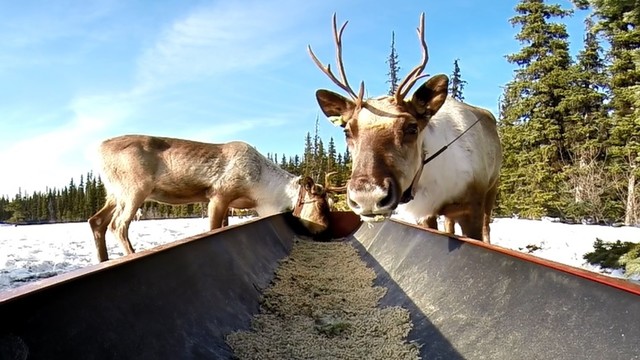 Peace Northern Caribou are in trouble and we're doing our best to help them.

The Klinse-Za maternal penning project is an emergency measure recommended for the Klinse-Za caribou herd in a recovery action plan developed by West Moberly First Nations and supported by Saulteau First Nations. The purpose of the penning is to protect pregnant cows and their young from excessive predation during calving season. By implementing the project, the First Nations partners are taking steps to avert extirpation of the Klinse-Za herd and demonstrating the viability of maternal penning to help bolster other vulnerable caribou populations in the South Peace region of Northeastern BC.

How the Penning Program
Comes Together

In a nutshell, following an extensive population analysis, a group of selected caribou females are captured and transported via helicopter to a remote, secure penning site that is approximately 7 ha in size.  Once inside the cows are fed and protected, at a distance, by First Nations shepherds that reside in a nearby camp.  The cows are slowly transitioned from an exclusive diet of lichen to specialized pelleted rations, which they will consume until they are transitioned back to lichen before release. Shortly after their birth the calves are outfitted with radio collars, which allow wildlife biologists to monitor their travel and general state of well-being (mortality).  The capture of the females takes place in early March, as they enter the third trimester of pregnancy. The release of the cows and calves takes place 4-6 weeks following the births at the beginning of June.

In addition to First Nations leadership and staff members, the maternal penning program team consists of an advisory team that includes representatives from other caribou penning programs in BC, a University of Northern BC wildlife ecology and nutrition professor, game farm owners and the Province of BC.  There is also a technical team made up of First Nations knowledge holders, regional wildlife biologists, veterinarians and the First Nations shepherds.  Overall Project coordination is done by Scott McNay and his team at Wildlife Infometrics Inc. of Mackenzie BC with the support of Brian Pate at West Fraser Mills, Chetwynd BC.

Where the Funds Will Go

The maternal penning program is a labour of love, but it does come with a hefty price tag. Despite being able to secure support from regional industry proponents, the Province of BC and Environment Canada, we're still coming up short to meet some of the operational costs that are an integral part of the program. These costs include wages and supplies for the First Nations shepherds that live on the mountain 24/7 to ensure that the caribou are fed and kept safe, as well as the purchase and delivery of pelleted rations for the caribou.

Peace Northern Caribou Recovery is managing the funds for this campaign. The campaign is for a personal cause.