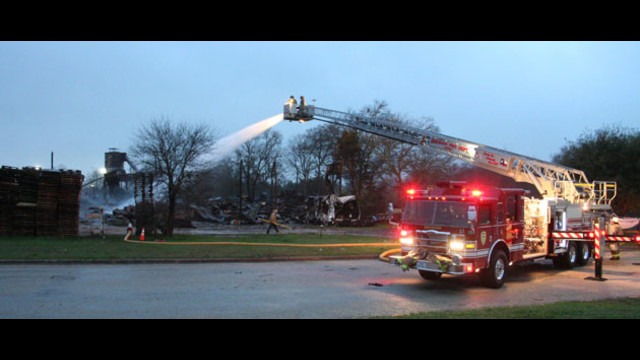 God Bless my sister Jennifer (Baker) Rybarski and her husband Scotty Rybarski. Scotty has worked for his family’s business, Bren-Tex Pallets, since he was just a boy. Scotty’s parents have owned Bren-Tex Pallets for almost 25 years. Since his father’s death in 2010, the business has been run by Scotty and his mom Dino. Yes, just the two of them. Dino ran the office and Scotty worked out in the shop. Scotty built pallets the old fashioned way, cut the wood to size and nailed them together. He would then load them on a trailer and personally deliver the pallets to customers. It was a small town family run business that still believed in hard work, honest business and neighbors helping neighbors. Bren-Tex Pallets didn’t make a lot of money but enough to sustain the two of them. The biggest fear of any pallet company is fire. Unfortunately, Bren-Tex Pallets was destroyed in a 5 alarm fire that occurred early morning on February 16, 2015. Scotty is a proud man, a salt of the earth type of guy that would never ask for help even though he’s always there for anyone in need and would never ask for a thing in return. The family will eventually land on their feet as they are resilient. But the next few months will be tough both emotionally as well as financially trying to figure out what the future will hold for them. I’m reaching out to my family and friends for help in this time of need for my sister’s family. Several folks have ask how they can help so we have set up an account that people can make donations to help the Rybarski’s manage through this difficult time.

Kimberly Baker is managing the funds for this campaign. The campaign is for a personal cause.