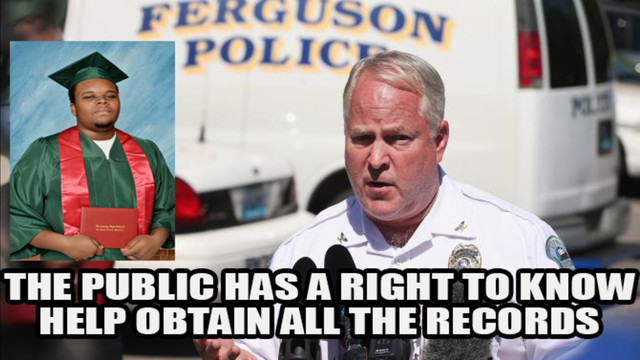 WE REACHED OUR FIRST GOAL OF $3,000 and sent the initial retainer. So the process has begun. We still need to raise the rest of the costs that will be incurred so we added a new $3,000 target.  Thanks to all who have contributed and thus participated.  Please share the link/page.

[NOTE: Because of boycotts and problems with other fundraising sites - I have created this one.]

Join the effort to shed sunlight on the evidence and activites of the police in the Mike Brown shooting incident. A lawsuit is being filed to force the full and uncensored release of all of the Incident Reports and related public records of the St. Louis County and Ferguson Police Departments.

This case is of extreme importance to all members of the public for three significant reasons:

1) It is necessary to obtain the records and evidence in this particular case to ensure that justice is served, a full investigation and prosecution is undertaken, and public officials and police agencies are held to account for their actions in the death of Mike Brown and cover up of the officer's and agencies' actions.

2) It is vital to ensure the public has a right - now and into the future - to obtain any and all Incident Reports of police agencies in the state of Missouri.

3) It is essential to the public, its right to know, and its ability to hold government agencies and officials accountable under the law that the Sunshine Laws - and in particular the Public Records laws - of each state are recognized, respected, and enforced.

That a law enforcement agency - in this case two of them - would deem themselves to be "above the law" and not required to fully and faithfully comply with the public records laws or to recognize and respect the rights to information that these laws ensure to the public - is a slap in the face of democracy.

We have a RIGHT TO KNOW.

And now is the time to STAND UP FOR THOSE RIGHTS.To do so a legal challenge to the violations of the Sunshine Laws of Missouri, and its Public Records Laws, is being undertaken by concerned citizens. The very citizens who have been working to obtain those records.

We have obtained a prominent attorney as counsel in this effort and he has agreed to cover the bulk of the costs for this litigation. We know that this case will be a fight of epic proportions to ensure that the public rights are acknowledged, upheld, and enforced. We know from the start that this is going to require litigation at all three levels of the judiciary: the trial court, the appellate court, and ultimately the Missouri Supreme Court.

But this is what is necessary to uphold the laws and enforce our rights to public records. And to obtain the records - and thus evidence - of what happened in the Mike Brown incident and afterwards.

To uphold those rights requires, when officials and agencies openly defy the law and defile those rights believing no citizen has the will or the means to take them to court, an aggressive and determined legal challenge in the courts.

And we are prepared to do just that. But this is also an effort that ordinary citizens could never - on their own - afford to take. Thus the public officials and agencies do not generally fear being held to account for their violations of these laws. Laws that they dislike because they are, in fact, citizen-empowering laws. Laws that enable citizens to participate, directly, in overseeing their government agencies and actors and when necessary holding them to account under the law.

The cost of this litigation will ultimately run into the tens of thousands if not hundreds of thousands of dollars. Our attorney, however, has agreed to take on the bulk of those costs on behalf of the public and in the public interest.

To make this possible, however, we need to provide the basic costs to get the litigation going and cover initial expenses. This will amount to only a fraction of the full costs to have our rights preserved and protected and these vital laws enforced.

We are thus making an initial appeal for $2,000 to cover the retainer and $3,000 the initial costs involved in getting this case filed in court. We want to do so without delay and this minimal amount will enable us to move forward immediately.

By joining together, as individual concerned citizens, with small donations from across the country or even the globe, we can make this a reality. Thus we become able to defend our rights, which would normally be cost prohibitive to any individual, while also directly participating in an important cause - the particular cause of justice in Ferguson and the general battle to uphold the public's right to records, its right to know, and its right to hold our public servants to account under the law.

Will you please join this effort with any donation you can afford - the smallest donations made by a large number of people can add up - and thus every individual's contribution counts. We need your help in this cause.

If we can meet this first goal quickly we can have this case begin its way through the courts on a journey to right the wrongs and set the precedent for the future - the public's right to records shall be respected and enforced.

We will have to continue raising funds after this but this will enable us to start the process. But we will only have to raise the basic costs - the rest of the case will be taken on a pro bono basis by our attorney - and those costs will be substantial. Unfortunately it takes money to defend our rights in court. But we only have to raise the basic costs - the bulk of the expenses will be covered by our attorney who firmly believes in the right and just nature of the case and the cause.

For some background on how the Public Records laws have been used by citizens thus far in this case - as well as telling part of the story of how we got this far so as to have a cause of action that can both address the wrongs in this particular case as well as establish the precedent to ensure that we will not face similar obstacles in future cases - I provide a few articles and radio interviews that address this subject and tell part of the story.

Please take a look - and join in the efforts - because TOGETHER WE CAN MAKE A DIFFERENCE.

No Incident Report? Then Where’s Use of Force Report? More Violations from Ferguson

AND TWO RADIO INTERVIEWS ON THE SUBJECT

Again I want to encourage all to PARTICIPATE in the effort to have our rights respected and enforced and to seek justice in the case of Mike Brown.

Every little bit can add up to alot if we work TOGETHER. No contribution is too small. All we ask for is what you can afford to contribute.

For further information you can contact me via the features on Go Fund Me.

Get Ferguson Police to Release All Public Records Community

Charlie Grapski is managing the funds for this campaign. The campaign is for a personal cause.