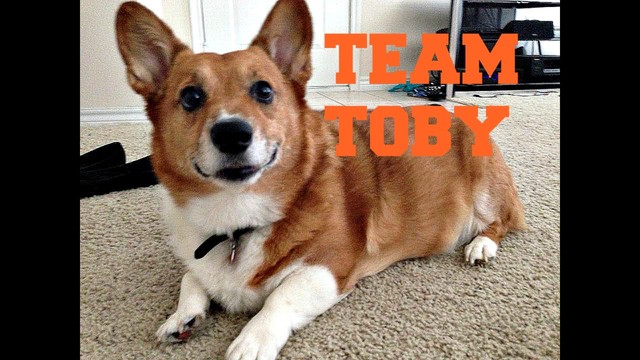 On Friday, November 22nd, 2013, Toby the three year-old Pembroke Welsh Corgi was attacked by several of his neighbor’s dogs, who broke through the fence and into his backyard. Toby sustained nearly two dozen puncture wounds, a torn trachea, nerve damage, possible loss of a leg and major muscle tears, as he defended his little Corgi brother Tucker from the aggressive dogs.

Since the devastating attack, Toby has been hospitalized at the VCA Metroplex Animal Hosital in Irving, Texas, where he is receiving expert care around the clock and gaining the strength he'll need for his upcoming surgery. The Daily Corgi has created a Team Toby facebook page to keep his growing crowd of admirers and supporters around the world up-to-date on his condition.

Toby’s parents Eve and Derric have released the following statement to The Daily Corgi:

“First off, we want to thank everyone for the well wishes, prayers, pictures and positive vibes for Toby and our family during this difficult time. It means so much to us. We don't think we would be doing as well as we are without them, so thank you!

To make sure Toby gets all the medical treatments he needs – including a surgery within the next week -- we are using a family member’s credit card, on which we’ve agreed to make the monthly payments. The neighbors who owned the dogs offered  to pay Toby’s bill on the day their dogs mauled him, but we don't think they realized that treatment would cost several thousand dollars. They have not reached out to us since their offer to pay, shortly after the attack on the 22nd of November.

We hired a lawyer, who is confident we will win the case, in light of the fact that the dogs who injured Toby so gravely had a history of previous attacks. Even if we win the case, it could take anywhere from three months to two years before we see any money, either by the neighbors directly, their insurance carrier, or in a settlement.

In the meanwhile, the hospital will not release Toby until his bills are paid, and our ability to pay the bills has been outstripped by available resources. Our first estimate was for a five day stay at a cost of $4,500. Because Toby has needed more time to be ready for surgery, however, the doctors and veterinary surgeon expect him to be there until at least Tuesday, December 3rd. As a result, the projected total estimate for his care -- including surgery -- now approaches $17,000.

Once Toby is discharged, the vet hospital will release the records and bills to us, so we can turn them over to our attorney. After we are reimbursed for his medical bills through the attorney, we will donate all money given for Toby’s care through this fundraiser to organizations helping Corgis in need. Because we admire the work of CorgiPals and CorgiAid, we will want to give to both.

Thank you for considering a donation to Team Toby’s Fund. Little Tucker appreciates your TLC too, as he waits for his big brother to return home. Your generosity will benefit our boys now and other needy Corgis in the future."

The Team Toby campaign has been established by Daily Corgi blogger Laurie Eno, for the benefit of Toby and his family. This campaign is in no way affliated with CorgiPals or any other organization. All funds donated via this site will be delivered directly to Eve and Derric, minus the small processing fee witheld by FundRazr and PayPal.. Your donation of ANY size is welcome -- no amount is too small!

If you would like to donate to the Team Toby campaign but do not wish to send money on-line, you can send your contribution directly to the VCA Metroplex Animal Hospital in Irving, Texas. Their address is 700 West Airport Freeway, Irving, TX 75062. Be sure to put "For Team Toby" on the memo line of the check! If you want to call and make a contribution using your credit or debit card, the hospital phone number is 972-438-7113. They are open 24 hours a day, every day (including holidays).

Please bookmark the Team Toby facebook page for regular updates. You can also leave a message there for Toby and his family, even post a photo of your own dogs if they want to pitch in or just say hi!

All inquiries about the administration of this fundraiser should be directed to Laurie at thedailycorgi@gmail.com.

Thanks everybody, and CORGI ON!

Laurie Eno is managing the funds for this campaign. The campaign is for a personal cause.