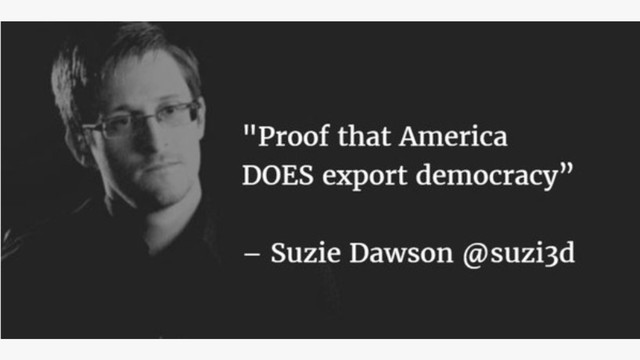 Kiwi journalist Suzie Dawson and her young family are the first known New Zealanders to seek asylum in Russia.

With your help Suzie will be able to continue keep a roof over her family's head, pursue her legal case and continue her important journalism.

* For 5 years Suzie has been a target of Western governments due to her political activism and journalism.

* There is reason to believe that she was one of 88 people targeted by the NSA on behalf of the New Zealand government.

* Since Suzie spoke out, six people have come forward on the public record to confirm that they knew Suzie was being targeted, including two commercial media figures.

* Over the years, her work was shared on social media by a number of high profile figures including Glenn Greenwald, WikiLeaks and Kim Dotcom.

* Suzie is unable to work while her application for asylum is being considered and urgently needs financial and legal support. Suzie is now writing for We Are Change, but still cannot be employed while her legal status is unresolved. We Are Change have published a fantastic interview with her which you can read here.

* International NGO's in Russia rely on Western support so initially refused to help Suzie because of her nationality. That may change as awareness of her situation grows. You can increase the chances of getting organisational support by spreading the news about this case.

* A Tumblr account is compiling information about Suzie's situation - you can check that out at this link.

Suzie has written extensively about highly politically-charged subjects like political corruption and whistleblowers and has covered over 50 live political events, working to promote a variety of social movements including the NZ movement against the TPP and many others. Suzie was the #1 social media influencer in the movement against the GCSB, New Zealand's NSA.

Suzie produced a documentary called 'Diary of a Person of Interest' detailing why and how she has been targeted and persecuted, and by which agencies. The documentary has been described as "Jaw-dropping", "Avidly-watched", "Very important" and "Terrifying".

Suzie has faced her situation with a courage that is rarely seen. Most people in her shoes simply give up and allow themselves to be silenced. With your support, Suzie can continue to speak out for those who are vehemently attacked by the establishment elites.

Please help Suzie by donating generously so that she can continue to speak truth to power.

Please share this campaign relentlessly anywhere & everywhere that you can, so that everyone can learn about Suzie's important work and be inspired by it.

Follow the campaign to help Suzie on Twitter: @HelpSuzi3D or follow Suzie herself: @Suzi3D. Despite her difficult circumstances Suzie is continuing to publish work frequently, new articles and updates are posted to her website Suzi3D.com

Thank you so much for your support.

Suzie Dawson is managing the funds for this campaign. The campaign is for a personal cause.