Before you go, did you know that simply by sharing this campaign, you could help it raise ₪150? It's an effective way to support the cause. 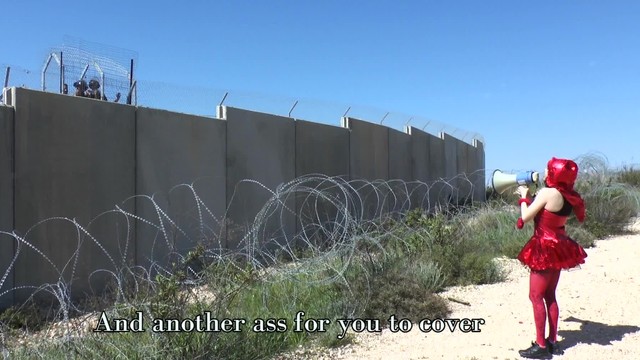 Holding this mirror to Israeli public's face made her the target of a prolonged intimidation campaign which includes state authorities, hostile media and fascist mobs. Last November she was arrested and after spending a night in jail was released on a 10,000 Shekel bail (about $2,000), and put on a month-long house arrest with no access to the Internet -- her main medium of work. In addition, her personal computer and phone were confiscated for three months. This was in response to a video she posted of her and a collaborator pooping on flags of many a nation, including the Zionist one, which she released during the Gaza massacre of summer 2014. The prosecutor mentioned also the viral video in which Vaxberg famously performed as the Holocaust at the National Holocaust Museum in Jerusalem. In it, she criticized the whoring of the holocaust’s memory in Israeli politics and its usage to justify Israel’s criminal policies against the Palestinian people. A year later, she is still repeatedly taken to interrogations by Israeli police with no prior announcement, where the porkers "analyze" her plays and video performances, and she is regularly harassed by fascist mobs on the street. Media coverage in Israel only isolates her further: on her first TV interview she was presented under the title of "The Most Hated Woman in Israel". Currently there is a pending case against her for "hurting the public's feelings" and for "contempt of state and religious symbols".

With no institutional support, no compensation for her art, and extremely limited employment options otherwise, we ask for your solidarity and support. Contributions will be used to defray legal and production costs. Please help Natali keep producing her defiant, subversive work, which is vital in these dark days of surging xenophobia and state repression of dissent and artistic freedom.

Natali Cohen Vaxberg Fund is managing the funds for this campaign. The campaign is for a personal cause.