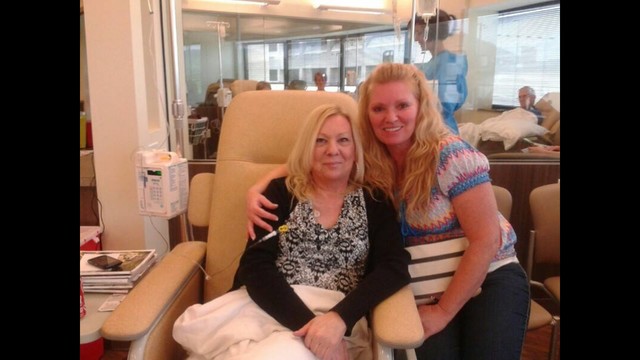 Angie my sister is age 52 diagnosed with Stage 4 colon cancer in April 19, 2014. We have a hereditary disease in our family called FAP or Familial Adenomatous Polyposis. Polyps develop early in life around the time of puberty and if left they can be deadly.  Angie had a surgery earlier in life and things were good. She started having severe pain in her back and for about 12 months the doctor was treating her for sciatica testing her for celiac disease sending her to pain management for injections to the nerves of her back etc and all the while tumors were growing causing her this excruciating back pain that the doctors thought she was just looking for pain meds She lost 52 pounds in a 4 month time span and still no red flags to the doctors in the clinic where she had been treated for 19 years...Until she went to the ER at Saint Thomas Hospital in Nashville,Tn. In an hour and a half she was diagnosed..  Since that day she has had a partial illeostomy( cant complete it until she is healthy enough) and started aggressive chemotherapy. She must be driven every two weeks to treatment in Nashville tn. every two weeks to see her oncologist at Saint Thomas Hospital  Dr Gregg Shephard(who is awesome by the way) Expensive yes and it is an all day affair every two weeks. She has been informed by her doctor she will remain on some type of chemo for life. Over the course of treatment to date she has had around a 65% reduction since she started. Inititally she had a massive tumor in the lowest part of her colon and a large section of her liver and a spot on her lung that to date had not positively been determned if it is a tumor also or not. So AWESOME on the 65% reduction!!!! Thats the good part. Angie also has two teenage girls Alaina 15  and Faith 14  at home and a college student Jesse age 19 As well as two more adult children Amanda 32( who is also effected by FAP and had over 28 surgeries/procedures over the last 7 or so years )  and Josh 28 and 1 granddaughter Lily age 11.

So over the holidays dec 2014 we got my sister moved into a temporary residence. Friends and family had a benefit for her in which enabled her to move and have some money to hang onto for monthly expenses and medical needs .  She goes to Nashville two times s month or three and has very limited income . We are trying to keep her in her own place with her teenage girls so they have as much normal as they can . I would like to raise as much as we can to help keep her where she is and expenses along the way . We would love to raise enough to buy her something as I stated before but right now just day to day is the concern. Anything donated is greatly appreciated and solely used for her and her girls benefit during this uncertain time .

julie louck is managing the funds for this campaign. The campaign is for a personal cause.