Comedy Show with Sunda Croonquist
Contribute
Campaign extended! Our deadline has passed but you can still help. ✕

No thanks
Comedy Show with Sunda Croonquist
✖
Gallery (2) 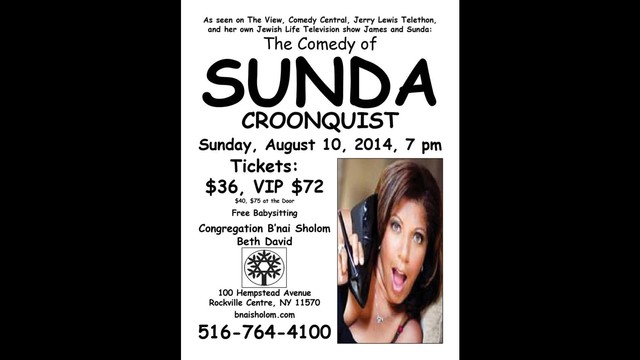 $225 raised 11% of $2k goal
3 contributors
5 Years running
Contribute
By Ary Rosenbaum
Are you friends?
Personal campaign Keep it all
Rockville Centre, NY, US

We are a Conservative Synagogue in Rockville Centre, New York. We are conducting a comedy show starring comedienne Sunda Croonquist who has appeared on The View, the MDA Jerry Lewis Telethon, and The Today Show. She has her own show on Jewish Life TV called "James and Sunda". She's half Swedish, half African American who converted to Judaism, so her life story is a great part of a terrific and funny act. Ary Rosenbaum hasn't posted any updates yet.
Newest | Oldest
Show more
NEW Thank you emails can now be sent directly from the Transactions page.
Alternatively you can still leave a comment here.

Ary Rosenbaum is managing the funds for this campaign. The campaign is for a personal cause.