Thank you everybody. Our campaign is now over. ✕
Help Kimberly With Medical Procedures & Surgeries!
SubscribeUnsubscribe
✖
Gallery (1) 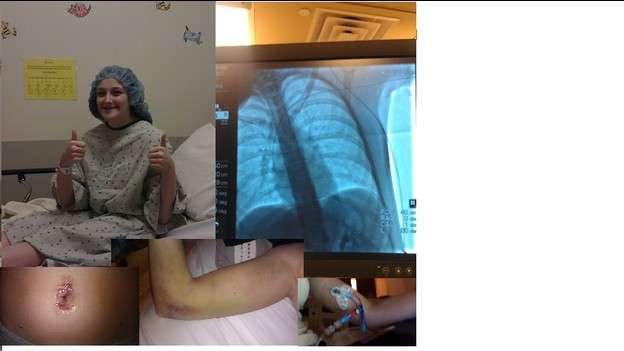 As everyone in America is aware, with health insurance or not, Medical Bills are Ridiculously Expensive. Kimberly has a bile duct leak in her liver, which allows bile to just flood into her stomach at all times. A lot of you by now are aware that Kimberly is constantly unable to eat do to this problem. Not being able to eat without getting sick is the outcome of her liver leaking. We are trying to raise money to help pay for this life changing surgery where they go in and patch up her liver. Since this is happening, Kimberly is unable to work, unable to go out to eat in public, and doesn't sleep.

Kimberlys back story is a very trying and heart opening one. In December 2011 her gallbladder had failed, and completely stopped working, this led to emergency surgery and removal of her gallbladder. A week later the hospital decided to go into surgery to see if they had done a successful job, however it gave Kimberly Pancreatitus, which 97% of people will never experience, however Kimberly did. Pancreatitis is instant inflammation of the Pancreas. It makes you unable to eat for weeks or in Kimberly's case months. The pain is horrific. Kimberly was placed on high dosages of medication every 4 hours which was pretty much sedation for 4 months. While dealing with this Kimberly's Kidney started to fail, and flood. They put a stint into her kidney on Christmas morning. However, the doctors had noticed a week later that the stint was not helping, and removed it immediately. While the doctors were expelling the stint, during surgery Kimberly contracted VRE, which is a baterial infection. The longer Kimberly stayed in the hospital the further away hope seemed to be.

After being hospitalized for months, no progress was made. They had to implant a picline into Kimberly's arm. A picline into someone Kimberlys age is very uncommon. It is a wire that goes through a big vein in your arm, and into the main artery in your heart. Which after many many failed attempts, the Nurse broke Kimberlys Artery, which cause a massive hemotoma (PIC INCLUDED). She was unable to move her arm for about a month due to all the blood stuck inside her arm. Her father, and Boyfriend were in the room of this occurrence, and horrific is an understatement. She laid there in pain screaming at the top of her lungs, crying, just wanting all of this to end. 8 out of the 9 people that were in that room were in tears and complete shock that this had happened.

She had been to the hospital for months at a time. We are trying to raise money for her to be healthy again, by doing surgery on her liver to repatch it so she will be able to eat again normally without getting sick, so she will be able to work, and be a normal happy health kid again. She has finally found a doctor who will perform the procedure necessary to fix whats going on thanks to the Mayo Clinic in Scottsdale. We are all just hoping to have this problem fixed, and have her back in good health. Enough to eat, sleep, and work just like the rest of us.

Im sure almost everyone remembers her daily Facebook updates about all of this horrible stuff going on. In and out of the hospital, about all of the pain, and even about losing hope. This is a real story, with a real person. Not Spam.

Kymberlee Gross is managing the funds for this campaign. The campaign is for a personal cause.