Thank you everybody. Our campaign is now over. ✕
Save Bomb Girls
SubscribeUnsubscribe
✖
Gallery (1) 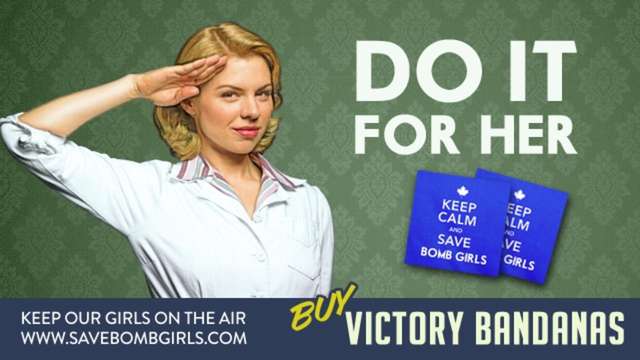 Christina -B hasn't added a story.

Do you want to help keep the best show on TV on air? Then join the legion of Bomb Girl fans as we join forces and rally the troops for our Bomb Girls. Read below on how YOU can make a difference.

We chose a blue bandana to represent the blue turbans our Bomb Girls wore. Additionally, the turban is a symbol of the sacrifice, bravery and strength that history's bomb girls displayed at a time when the world needed them the most.

We are upping the ante with our next campaign as we direct our attention to Global TV and striving to make a statement so large that it has Betty McRae written all over it. And we are depending on your help to pull it all off—however, this time we don’t just need your fabulous dedication, but also, your donations as well.

Why we need your help
We had planned to raise a minimum of CDN$1,000 in order to deliver at least 200 bandanas as a message to Global that we fans want the stories of Bomb Girls to continue. Amazingly, we reached that target in under 12 hours, and another $1,000 came in over the next 12 hours. Our next goal is to raise at least CDN$4,000 to send up to a total of 1,000 bandanas to Global—and because we want them to arrive before the end of the month, we aim to reach that target by May 10 . Some of the Victory Bandanas will go to fellow fans who donate (see below), and a few as a gift to the creative geniuses behind Bomb Girls.

We will send as many bandanas to Global as possible with the money we receive. Money raised above and beyond that needed to send 1,000 bandanas will be donated to the Ajax Bomb Girls Legacy Campaign charity (see below). It's for a good cause, so please keep donating!

Donors who contribute $25 or more will receive a Victory Bandana. Use your Victory Bandana to make a statement! Post pictures wearing the Victory Bandana, hanging it as a sign, cute pets sporting them, etc. Creativity is welcomed!

The more money we raise, the more Victory Bandanas we can send to Global TV, and the higher the impact will be.

Please note that every little bit counts, even a donation of a dollar or two will be welcomed. Give what you can.

If you have any questions, please contact us at victorybandanas@savebombgirls.com. Donors giving more than CDN$25 will be contacted by e-mail for your shipping address.

Are you ready to chip in? Yes? Then what are you waiting for? Join the fight today!

Christina -B is managing the funds for this campaign. The campaign is for a personal cause.