Thank you everybody. Our campaign is now over. ✕
We are people.....
SubscribeUnsubscribe
✖
Gallery (3) 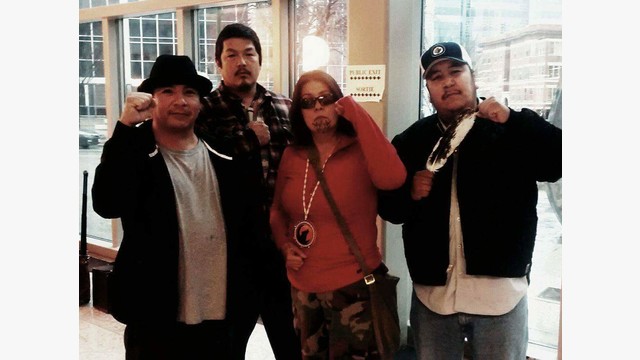 This fall Mihko Kinew, Joe Seenie, and other protectors traveled to North Dakota and stood with thousands of others in solidarity with the Standing Rock Sioux tribe's resistance to the Dakota Access Pipeline. The Dakota Access pipeline was constructed without consent of impacted communities and threatens the lands, sacred and cultural sites, and waters of the Standing Rock tribe and those dependent on the Missouri River. Standing Rock North Dakota 2016 After returning from Standing Rock, North Dakota, they were unjustly attacked by Canadian border services. (Sept. 10, 2016). We were stopped at the border, when a group of unusually aggressive guards issued contradictory orders to the passengers of the van. Shortly into the incident we were removed from the vehicle where some were maced, assaulted, and detained for over twelve hours.

We were obeying the law itself, yet we met with violence, and face undue charges and legal costs for crossing the international border. The law we live by is the foundation to all International Law. It is lesser known due to many complications with certain treaty, doctrines, papal bulls made in the past after 1492. Millions upon millions around the world have died from this over conquest, there is not a people in the world that have not been affected by this long term war. All in all the four of us do have the oppurtunity to present this as done before in other parts of North America to stop the continuation of misuse of law to oppress and demoralize people.

This case creates a peaceful opportunity to address longstanding injustices. It is a controversy and legal situation that should have been addressed and remedied years ago in North America and the world.

With our court date fast approaching it is imperative we get proper legal representation at the international level of law to handle the court case. Injuries sustained have brought havoc to our employment opportunities and other financial avenues.

Donations are being used to set up proper legal representation for our case and for fairness in law. Additionally, funds will be used to coordinate their transport for court appearances, legal advisor travel expenses, court filing fees, expert witnesses, and more. Chi-Miigwetch (Thank you) for your donations and please share with your networks and colleagues to help them secure the urgent legal counsel and representation they require. Contact: dannyboycrowe@hotmail.com Facebook Page: https://www.facebook.com/Aki-Anishinaabe-Earth-People-333250257038814/

Mihko Kinew Mahikan Wakotowin is managing the funds for this campaign. The campaign is for a personal cause.