No thanks
Help Dacota With Medical Expenses!!!!
SubscribeUnsubscribe
✖
Gallery (1) 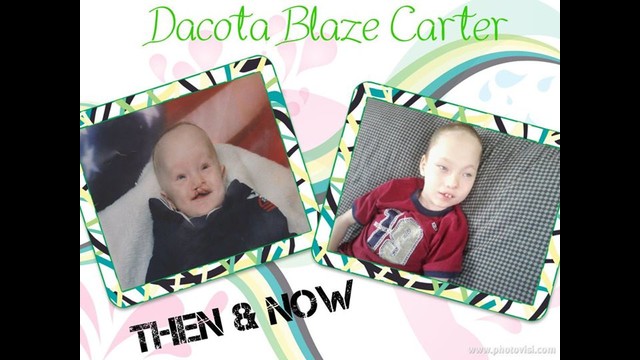 $90 raised 1% of $10k goal
3 contributors
7 Years running
Contribute
By Tiffany Carter
Are you friends?
Personal campaign Keep it all Oran, MO, US

Hi. Meet Dacota "aka" Cota Man. Dacota is a 10 year old little boy. Dacota has multiple illnesses that include Holoprosencephaly, Hydrocephalus, Ceberal Palsy, Epilepsy, Clubfeet, Scoliosis, Torticollis, and Amniotic Band Syndrome. Dacota was also born with a Cleft Lip that has been repaired. Dacota has been through multiple surgeries that include having a VP shunt placed, a shunt revision, cleft lip repair, feeding gastrostomy tube placed, a nissen fundoplication, a bilateral heel cord release on both feet, and a extra big toe removed. Dacota still faces more surgeries in his near future. One of them being the correction of his clubfeet. The reason I have created this account is to ask for help. Some of Dacota's medical expenses are not covered by medicaid. Some of Dacota's medical equipment is not covered by medicaid. For instance, Dacota is in need of a siezure bed. We were denied through medicaid and have applied for other assisstance but the funds are just not there. Some of you that live in the Heartland of Missouri may have seen Dacota on the news before. Dacota was featured as a Heartland Hero. We would be so grateful for any help that we may recieve for Dacota. Thank you and God Bless!!!

Tiffany Carter is managing the funds for this campaign. The campaign is for a personal cause.