Thank you everybody. Our campaign is now over. ✕
Lots of Love for Laurel
SubscribeUnsubscribe
✖
Gallery (1) 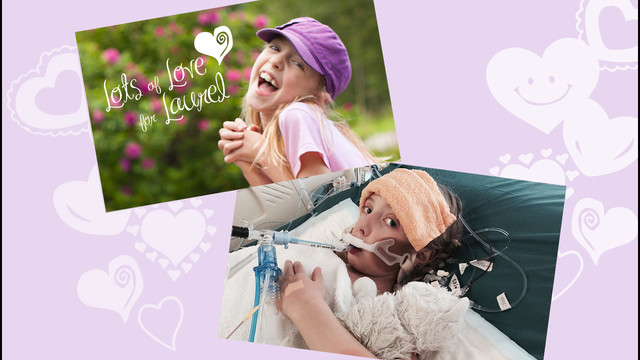 As many of you know, sweet little Laurel Taylor began having health problems near the end of 2014. It quickly became serious and she has now been in the hospital since December 15. She and her parents were flown from Vancouver Children’s Hospital to Toronto’s Hospital for Sick Kids where she continues to undergo testing and treatment. The Taylors are strong in their faith and are trusting God for the direction this journey will take; Laurel has a big mountain to climb. We have had many of you ask if there is way to help them out financially during this difficult time, and so we have started this page to make it easier to collect donations. Anything to help with living and travel and extra medical expenses during this time will help to make this difficult situation just a little bit easier. Please also continue to keep Laurel in your prayers. Thank you!

Here is Laurel’s story so far, as told by her parents:

“Our 8-year-old daughter, Laurel, has been healthy all her life until this past fall, when we noticed she didn’t want to partake in certain activities like swimming, riding her bike, playing outside. She also began to lose weight, become more tired during the day and sometimes get out of breath easily. Our family doctor referred us to a pediatrician who we saw on December 11, 2014, and said that he heard a loud a heart murmur, and noticed that her liver was enlarged. Four days later we were at BC Children’s Hospital where Laurel started undergoing more investigation from the Cardiology Department. We soon learned it wasn’t a murmur, the doctors told us she had Primary Pulmonary Hypertension. Laurel started needing oxygen support because her lungs weren’t getting enough oxygen and were having a hard time getting rid of the carbon dioxide in her body. Her lungs also began to fill with fluid due to her heart working very hard, caused from the P.P.H. The Cardiology team and Respiratory team at BC Children’s felt that based on Laurel’s symptoms, she had a very rare condition called Pulmonary Veno-Occlusive Disease. The only successful treatment for this disease is a lung transplant. We were then sent to Toronto’s Sick Kids Hospital for Laurel to have a lung transplant assessment, first of all to get a diagnosis of her condition, and undergo testing to see if she is a candidate for transplant. This could take up to two weeks.  We will soon have a confirmation of a diagnosis and how doctors will continue with her care. The Transplant doctors have told us everything looks good so far for Laurel to be a candidate for a transplant.  If Laurel gets listed I (Michelle – her mom) will be staying with Laurel in Toronto while, Shawn – her dad, will stay in Toronto as long as he can, then travel back to Quesnel to care for our 10 year old daughter and resume responsibilities at home. We would be relocated for approximately two years and this includes post-transplant.  Shawn and our older daughter would come to Toronto to visit sometimes. That is our plan so far but we know that our plans will get tweaked along the way.”

Tineke Ziemer is managing the funds for this campaign. The campaign is for a personal cause.