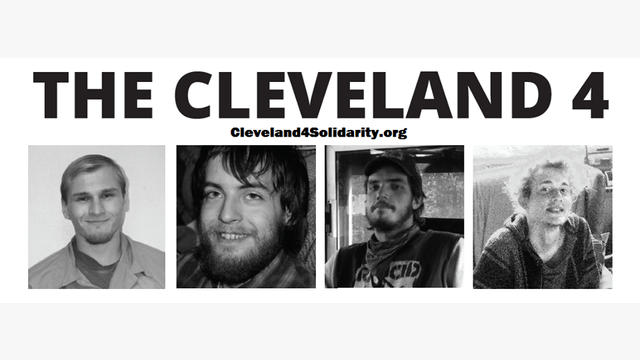 The Cleveland 4 were four Occupy Cleveland activists—Brandon, Connor, Doug, and Joshua “Skelly.” They were arrested on April 30th, 2012, accused of plotting to blow up a bridge. But it was the FBI, working with an informant, that crafted the plot, produced the “explosives,” and coerced these four into participating.

Connor, Doug, and Brandon took non-cooperating plea deals and pled guilty to all charges. The judge applied a “terrorism enhancement” to their sentences, elongating their sentences as well as subjecting them to harsher prison conditions. Doug is serving 11.5 years, Brandon 9 years 9 months, and Connor 8 years 1 month—all to be followed by lifetime supervised release.

Skelly took his case to trial and acted as his own lawyer. The government offered him a non-cooperating plea deal with a 3 year sentence, if he would have pled guilty. Josh refused to plead guilty to something he didn’t do, but he was found guilty on all counts by his jury and sentenced to 10 years.

All appealed their sentences, and all appeals were denied.

Support them as they continue to fight against the government's attempt to brand them as terrorists and to expose the techniques of entrapment used by the FBI.


Donations go directly towards supporting the Cleveland 4 while they are in prison. Keeping money on their commissary accounts allows them to buy paper and stamps, make phone calls to loved ones, and purchase personal care items and other necessities. Donations are also important for having funds for basic legal expenses that arise and to help loved ones afford to visit them. Thank you for whatever support you can contribute.

Visit Cleveland4Solidarity.org to learn more about their case and what you can do to support them.