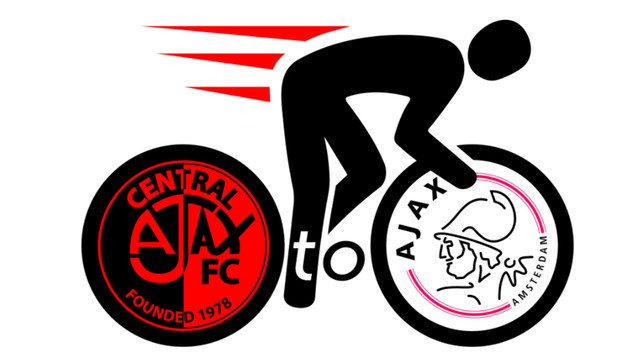 We are proud to announce that as a group of friends we will be cycling from 'Ajax to Ajax' to raise much needed funds for our best friend Matt Bates, who is fighting stage four cancer at the age of 26 (more info at Matt-Bates.co.uk). Funds raised will be used to cover future treatment, dietary and nutritional costs as well as supporting the Bates family with logistical costs such as accommodation etc.

The idea of Ajax to Ajax came about due to our shared love of Central Ajax - the football club that brought us together as kids, and reunited us recently when we coached the club's youth team. Our journey will take us over 430 miles from a charity football match on Easter Monday (March 28) - between Ajax Youth 2011-13 and a Matt Bates XI at Central Ajax FC in Warwick - to the Amsterdam Arena for Ajax's match with Zwolle six days later. We are a team of six - three cyclists, one driver and two media students who will film the ride for a documentary about Matt's battle, which we hope will enable further fundraising and awareness at a later date.

Please show your support for this great guy by giving what you can.

Sam Canty is managing the funds for this campaign. The campaign is for a personal cause.