Thank you everybody. Our campaign is now over. ✕
Old Skool George's Bike Benefit
✖
Gallery (3) 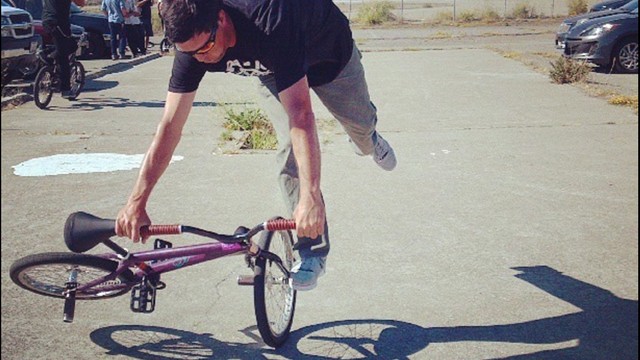 On August 18th, 2013 at the Sonoma Bike Expo in Santa Rosa, Ca., life-long flatland BMX rider, Jorge Luzuriaga, was assaulted and beaten badly by a handful of thugs. After being hit on the head and continued to be beat, kicked and punched, Jorge was left unconscious in the street with a multitude of broken bones, kicked in teeth and a dislocated shoulder.

Jorge - "Old Skool George" or "OSG" - is a true gem in the NorCal BMX community. His "down for anything" attitude brings riders together in such a way that he is adored by all who meet him. Originally from Mexico, he waxes nostalgic about his competing and show days and time spent with his BMX heroes from Team GT back in the 80's and 90's.

These days, he makes it a priority to be at every BMX event that occurs in the Greater Bay Area and beyond. He has a talent for videography and photography.

With the beating, the thugs stole his new phone, camera, camera equipment and his beloved flatland BMX bike.

Ever since I've known Jorge, he's ridden the same, beat up, welded-and-rewelded bike. All his parts are old and second hand used parts. The last time he cracked his frame, I told him is was "time for an upgrade" and humbly he expressed he couldn't afford it - and therefore welded it again.

Jorge supports he and his wife while she attends medical school to better their lives. He sacrifices a lot for the situation, but does it with a grin and a smile. Money is tight, and this has set them back even further. Replacing his bike will be very difficult.

With medical and dental bills on the horizon, I am asking the BMX community to come forward and reach into their pockets to help us buy Jorge a BRAND NEW BIKE. No more second hand stuff, no pieced together franken-bike... but a new, updated awesome ride he could be proud of.

Whatever you have, whether it be $1 or $100, please help us in this cause to raise the $1,200 it will take to get him something really, really, nice. After the bike purchase, anything left over will be used to help the Luzuriaga's with any bills they have.

We will also be hosting a benefit jam in San Jose, Ca. More details to come.

Thank you for helping a friend.

Thank you for your kind generosity.

See all activity82
NEW Thank you emails can now be sent directly from the Transactions page.
Alternatively you can still leave a comment here.

Dion Dion Dion is managing the funds for this campaign. The campaign is for a personal cause.