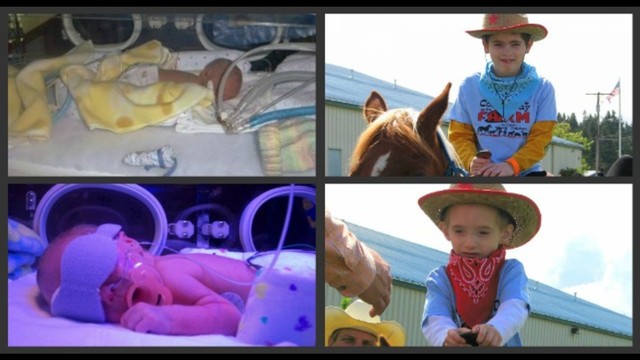 $40 raised 0% of $10k goal
1 contributor
7 Years running
Contribute
By Annissa Yahnke
Are you friends?
Personal campaign Keep it all
Bremerton, WA, US

I have two kids with medical issues. They were both premature. Noah was 1 lb 12.2 oz and Nathan was 3 lbs 4 oz at birth.

Noah was born with an extremely rare genetic disorder called Mosaic Trisomy 16. We were told he wouldn't live, period. 11 years later ... he still thrives! He has had many issues through out his life, including almost dying in 2007 and going into kidney failure. He has hearing loss in his left ear and kidney issues. Noah specifically needs help getting braces, this is not a cosmetic thing, it's a medical necessity that insurance isn't covering. He had teeth that are growing horizontal instead of down. He needs this corrected soon. Prior to it causing major issues.

Nathan has a lot of medical issues. Too many to list, but the main ones are that he has Russell Silver Syndrome (growth disorder) - he is 6 years old and 28 lbs, he is the size of a 2 year old. He has Autism, Sensory Integration Disorder, He has hearing loss in both ears. He had a cleft palate repair in May of 2012, and is facing two surgeries this summer/fall. One on August 2nd, one on September 3rd. Right now we need to raise over $5,000 for an electronic communication device because at the age of 6 he is still non-verbal/hard to understand. This is very frustrating for all of us, but especially for Nathan.
We have tried other avenues, but our trial proved this is the best option for him. We have tried to go through insurance with no luck.

PLEASE, I need help to get two very needed things for our kids! Every dollar helps!! We greatly appreciate any help! Annissa Yahnke is managing the funds for this campaign. The campaign is for a personal cause.