No thanks
Care for Kimberly
SubscribeUnsubscribe
✖
Gallery (1) 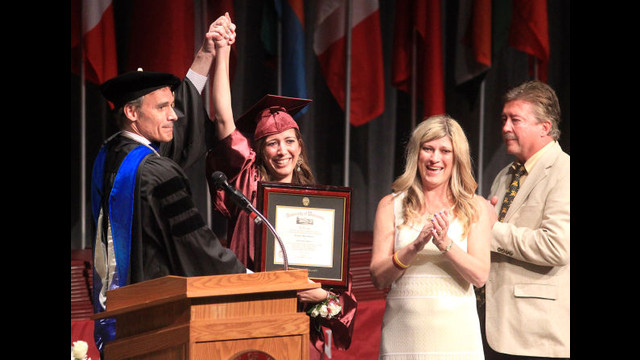 This is Kimberly's story, as written in a La Crosse newspaper.

Chancellor Joe Gow choked up. Tears streamed down the faces of people in Kim Graham’s cheering section. And Graham was crying a little bit, too.

But when the UW-La Crosse student received her extraordinary degree, her smile outshone everything else — her tears and her cancer. She was surrounded by her family, supported by her teachers and cheered on by thunderous applause from a packed La Crosse Center at UW-L’s graduation ceremony Sunday afternoon.

“It feels like I finally accomplished something that I’ve wanted to my whole life,” she said. “I worked really hard to get it.”

That’s how Graham has lived her life during the past five years, how she’s battled the cancer that is cutting short her time at UW-L.

Extraordinary degrees are usually reserved for students who died before graduating. Kim had been cancer-free since a November surgery, but the disease returned with a vengeance. Earlier this month, she got the new prognosis.

Academically, she’s a year away from graduating from the radiation therapy program, a career choice influenced by her health struggles. But according to her teachers, there’s no one who deserves a degree more.

“It’s unbelievable, truly. She is the bravest, most courageous person I can think of,” program director Melissa Weege said. “She’s never expected any help or extra attention.”

That spirit is why Graham is, to Gow’s knowledge, the first living student to receive such a degree.

Graham graduated from Germantown (Wis.) High School in 2008 and was supposed to begin her freshman year in La Crosse the same year. But a diagnosis of Ewing’s sarcoma, a rare cancer that most often strikes teens, changed that.

She delayed her start at UW-L, staying at home and taking online classes. She beat the cancer back and arrived in La Crosse the next year.

But cancer is a fickle disease. Graham struggled with bouts of the disease in 2009 and again in 2012. Both times she won, and she entered the spring semester with a clean bill of health.

Her recent diagnosis left her trying to soak up as much time with friends as possible.

“College students can be pretty self-centered,” Weege, the program director, said. “(But) the whole year it’s been about how they can help her. It’s kind of surreal but beautiful at the same time.”

“I couldn’t have gotten my degree without them here for the whole time,” Graham said.

She spent much of this week with 35 friends and her parents in Florida, hanging out at the beach and visiting Universal Studio’s Harry Potter theme park: Graham’s a big fan of the series.

They crowded the La Crosse Center on Sunday, wearing the same coordinated green and pink shirts they donned in Florida.

“We all love Kim so much,” said Sarah Christian, a friend who made the trip. “We would all do anything for her.”

According to Graham’s doctors, there’s not much, medically, that anyone can do. But if they thought that Graham was giving up, they’ve never heard the name that’s become something between a nickname and a tagline for her — “kimpossible.”

Graham will return to her hometown and pursue medical options at Children’s Hospital in Milwaukee.

“They don’t give me much of a chance,” she said, “but there’s always hope.”

Near the ceremony’s conclusion, Gow again called Graham up to the stage. After conceding his Harry Potter knowledge was woefully inadequate — “I’m not Dumbledore” — he managed to conjure up a reference from the series’ first installment.

Gow chose the fictional headmaster’s words of commendation. “Pure love and outstanding courage,” define Graham, he said. Then he removed the symbolic school medallion, which the chancellor wears each graduation, and placed it around Graham’s neck

She left the La Crosse Center floor with Gow, an example of courage and determination, leading the way for UW-L’s latest crop of graduates.

Kimberly and her family need help with the medical bills. Please help.

Leroy Meisner is managing the funds for this campaign. The campaign is for a personal cause.