Raising Money For Numbi's Oustanding Vet bills
Contribute
Campaign extended! Our deadline has passed but you can still help. ✕

No thanks
Raising Money For Numbi's Oustanding Vet bills
✖
Gallery (8) 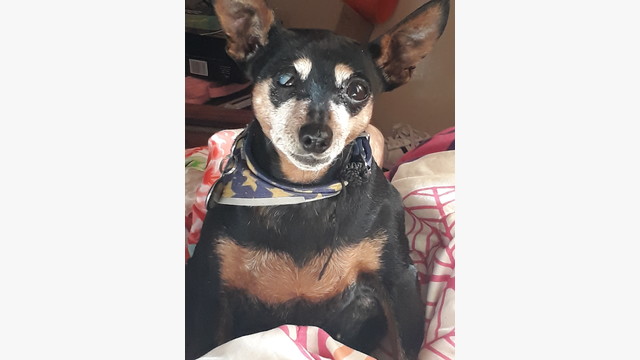 $270 raised 40% of $680 goal
3 contributors
93 Weeks running
Contribute
By Anastasia-Alexandra Nenova
Are you friends?
Personal campaign Keep it all
Vereeniging, ZA

My baby Numbi had to have an emergency uterus removal two months ago. We were lucky as we caught her on time. To explain in detail, the day prior she was rather limp... would not drink, eat and she looked to be in pain. We made an emergency appointment which was for the next day at 10 a.m, as soon as the Vet saw her he asked us to make a choice.

2.) Emergency operation with a 50 percent chance of survival

We went with option two. Due to the operation being an emergency, having to be done right then and there immediately, the costs were practically double. We are still hanging with the vet bill and even though we are doing our best to pay it off, every month charges are being added to the bill for delayed payment.

After the operation the vet said he had never seen such a large uterus in such a small dog (Numbi is a Miniature Pincher) her uterus weight 500 grams! She herself weighed 5.500, after the operation she was 5 kg. The vet said as soon as he removed her uterus, it burst outside. So it was just, JUST on time. She would have lost her life.

Numbi is about 12 years old, we are not sure. We adopted her in 2010. She is blind in the one eye, and dodged death twice. She is my baby and always will be! Your donation would be highly appreciated. She is the most bravest (to say person would be strange) dog that I have ever seen. She had stitches up her tummy for two weeks. She was put on medication which was tablets and also a fluid we had to give to her with a syringe. Also, she had to go back to the Vet for injections as she got sick soon after the operation. Now she is perfectly fine and healed, but as I said earlier... the vet bill keeps getting bigger and bigger and we don't have the funds to pay at once. I really want to clear our bill as I want our other dog, Numbi's daughter, Pinki to get fixed as well- to avoid a future life threatening emergency as the way Numbi's was.

Anastasia-Alexandra Nenova hasn't posted any updates yet.
Newest | Oldest
Show more
NEW Thank you emails can now be sent directly from the Transactions page.
Alternatively you can still leave a comment here.

Anastasia-Alexandra Nenova is managing the funds for this campaign. The campaign is for a personal cause.