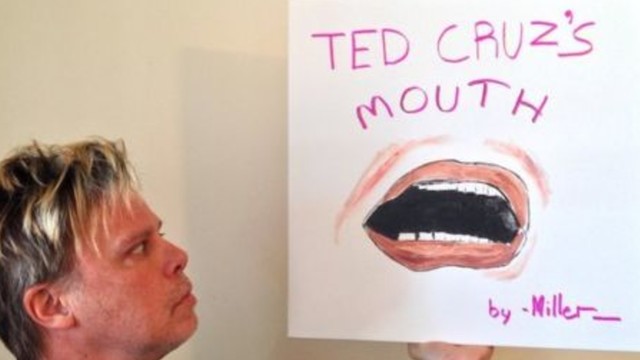 Hi. My name is Tom Miller. I am an indepedent performance artist listed in Wikipedia. Recently, I performed a piece called, "Staring into the mouth of Ted Cruz" in which I stared at a photograph of Ted Cruz, directly at his mouth, without breaking eye contact for two hours. At the conclusion of this event (which was written about in a viral Huffington Post article), I unveiled a painting of Ted Cruz's Mouth.

The idea was that this commemorative piece would be sold to a worthy fan for the reasonable price of $1,200, and the piece would have comedic and historic value and provenance since it was printed in the Huffington Post's national viral online article. But after listing the painting on ebay, nobody was willing to purchase it because a. it was Ted Cruz's Mouth, b. It's a pretty shitty painting, and c. the painting is cursed! Because I can't sell it, I'm out two-hundred dollars and without this money, I am unable to buy materials to make new and better artwork in the future.

I had no idea that in undertaking this task, I would unwittingly dip my toe into the occult until a strange event occurred. Several days after my event during a Republican candidate forum, a peculiar white object manifested itself on Ted Cruz's upper lip. This was captured by mainstream media and can be seen here in this clip: http://www.slate.com/blogs/the_slatest/2016/03/03/white_object_on_ted_cruz_s_mouth_unsettling.html

The object appears out of nowhere on Ted's upper lip, then transfers to his lower lip at which point he realizes it is there and sucks it back into his mouth where, presumably, he eats it.

Now some have suggest it was broken dental work, a bit of a chewed tictac, or possibly a cocaine booger. But in fact, I now know that this event occurred because of my intimacy and focus staring into Ted Cruz's mouth. I know it was a white powerball of pure evil. Very much like a voodoo doll, this strange object manifested from the infinite void as a direct result of my intense focus. And the reason I know this is because...the mouth in my painting told me.

The mouth in the painting has been speaking to me at night and filling my head with all sorts of terrors. It keeps repeating, "I'm going to win." Even after lowering the price of the painting to a mere $200, I have not been able to attract a single buyer from a pool of over 2,500 Facebook friends and fans. According to the ebay page, over 492 people have viewed the page and yet not a single bidder. I've had no problems selling paintings  before. Clearly, the painting of Ted Cruz's Mouth is infested with a demon.

Therefore, in order to prevent further psychological damage to me and my career as a painter and performance artist, I am asking friends and fans to make a small contribution--five, ten dollars--and when I have reached the $200 dollar price I would have sold the painting for at it's lowest discount, I will take the painting to a large smoking fire pit and cast the demon out into the fire, thus preventing the election of Ted Cruz and staving off armageddon.

Please help me today with your five or ten dollar contribution and let's exorcise this demon from Gainesville, Florida and the world. I need your help. As soon as the money is raised and the event is completed, I will post a video of the destruction of the evil and share it with every contributor who helped to make it possible.

Thank you for your consideration. The sooner we act, the sooner we can end the horror of Ted Cruz's demon, and maybe when he smiles in the future, the edges if his real mouth will finally turn upwards like they're supposed to. - Tom Miller 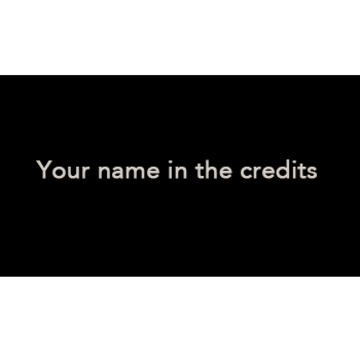 Add your name to the credits!
$25 USD

In the video of the destruction of Ted Cruz's Mouth, we will add your name to the concluding credits for posterity.