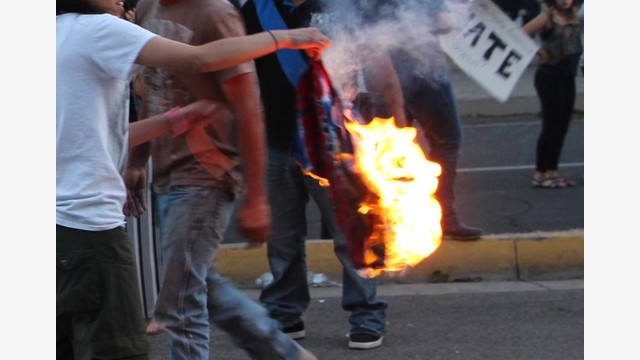 On Tuesday, May 24, 2016, hundreds took to the street to reject Trump's
racism, xenophobia, and misogyny. Albuquerque residents used a diversity of
tactics to make their voices heard, ranging from holding signs and chanting
to throwing rocks at the cops defending the Trump rally and attacking
protesters.

4 people were arrested during the protests: 2 adults and 2 minors. In the
aftermath, APD is attempting to track down 30 “thugs” the department claims
committed crimes on May 24. They released photos of suspects, targeting and profiling Latino youth. APD says they are waiting
until they have built air-tight cases to begin their arrests, so we don’t know
who or how many people will be arrested.

The money we raise will be used for legal expenses for anyone charged at
the Trump protest in Albuquerque. As this unfolds, we need to be prepared
to provide money for bail, legal fees, and if possible, legal
representation.

Donate to send a message against the persecution of Trump protesters! This
is what solidarity looks like. Support our troops!

Anni Telfer is managing the funds for this campaign. The campaign is for a personal cause.