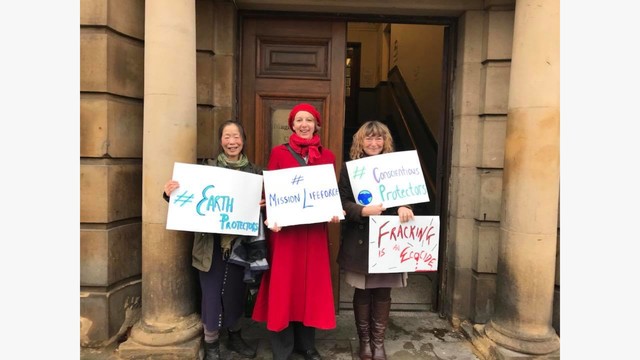 Please help the Stroud Frack Free Three with the costs incurred from our actions at Preston New Road Fracking site. Fracking is leading to huge increases in methane globally, a potent green house gas. It is deeply toxic to water, earth and air. The evidence against fracking is clear and yet vested interests are forcing it on England. When all other avenues have been tried, all that is left is civil disobedience. We laid in the road to prevent trucks from getting to a site where Cuadrilla want to frack. We contributed to an ongoing resistance which has so far successfully prevented fracked gas in the UK for several years.  We acted on our conscience and accept the consequences of our actions. We were fined and given a conditional discharge. We believe history will judge people like us kindly.

We have been fined and given a surcharge. We had other costs such as getting to and from court in Lancashire and it has taken up our time, so we couldn't do as much paid work. We will cover what we can, but we would love the help of our friends, comrades and family to support us financially. If we could raise £1000 we would have a burden lifted. Anything beyond that we will donate to other Protectors legal funds and MissionLifeForce.org (where you too can become a Trustee of the Earth).

Thank you for your support and being in solidarity with us.

Currently Petroleum Exploration Development licences (PEDL) to carry out exploratory seismic testing have been awarded to a number of drilling companies  (Osprey, Aurora  and Hutton).There are 27 sites licensed and marked including a site near Buxton, all in the Lancashire area. THEY NEED YOUR SUPPORT too. Fracking Hell on facebook keeps you updated with information and other things you can do to help.

Gail Bradbrook is managing the funds for this campaign. The campaign is for a personal cause.